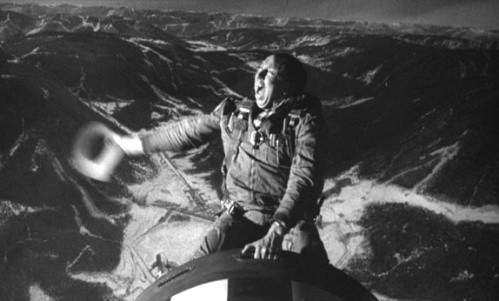 YOU’RE ABOUT AS EASY AS A NUCLEAR WAR, MITCH MCCONNELL: “But, beyond the unprecedented frequency of filibusters under Mitch McConnell, the current Republican minority wielded them to seize an unprecedented degree of control over the law and the judiciary. With enough creativity, Senate Republicans discovered that the filibuster could not simply prevent new laws from being enacted, it could also be used to effectively repeal laws protecting workers and regulating Wall Street.” (Think Progress) http://thinkprogress.org/justice/2013/11/21/2972671/senate-democrats-invoke-nuclear-option/

LIZZ WINSTEAD IS PISSED AT POLITICO FOR QUESTIONING MICHELLE OBAMA’S FEMINISM! RELATED: POLITICO IS SO ENDLESSLY EASY TO BE PISSED AT!: “We've seen this technique before on TV news interviews. The correspondent will say to the subject something like, ‘Some people have said you are a...’ and then a list a slew of character assassinations that apparently ‘Some unnamed people’ have said. This article feels like that. Except the sum total of ‘some people’ is her. (sulia.com) http://sulia.com/channel/feminism/f/e46577f6-a381-43b5-ae7c-bb298ccb4bae/

BOEHNER’S OBAMACARE BEEF IS SECOND-HAND SMOKE: “It’s a bummer that Boehner got that error message. Tyranny almost. But if he’d reached the point at which he was signing up for coverage, it means he’d already had a chance to shop around and pick a plan. His post is oddly quiet about that part of the experience. Which is curious. As a 64-year-old heavy smoker, it’s a marvel that Boehner will be able to purchase individual market coverage at all. I wonder what crazy law guarantees that he can?” (Salon) http://www.salon.com/2013/11/22/whoops_obamacare_turns_out_to_be_great_deal_for_boehner/

SICK TIME TASK FORCE IN TALLAHASSEE IS, UH, IMPOTENT: “Regardless of what's in the report and recommendations, it's highly unlikely that a state government controlled by conservative Republicans will do anything to revise, much less repeal the law, unless widespread public pressure heading into the 2014 elections forces them to.Public watchdogs tracking the issue suspect the task force may be little more than window dressing, a PR move meant to cloak an unpopular piece of public policy-making; and a little in-the-bank ‘due diligence’ to be pointed at before squashing any Democratic attempt to tinker with the law in the upcoming legislative session.” (examiner.com) http://www.examiner.com/article/fl-paid-sick-leave-task-force-weighs-public-interest-vs-disney-s-darden-s

JIMMY CARTER WAS GREENER AND MORE AWESOME THAN YOU ARE: “As the reporters scribbled furiously in their notebooks, Carter outlined a solar- powered future. He would ask Congress to approve a $100 million "solar energy bank" with the goal of generating 20 percent of U.S. power from alternative energy sources (i.e., not Middle East oil) by 2000. To fund this ambitious plan, Carter said, he would urge Congress to pass a "windfall profits" tax on the domestic oil industry and approve subsidies to encourage contractors to install solar panels on new and existing buildings.” (io9) http://io9.com/the-sad-fate-of-jimmy-carters-solar-panels-1469104906/@gmanaugh