Bird, bird, bird, the bird is the word: four offbeat methods of cooking your Thanksgiving turkey 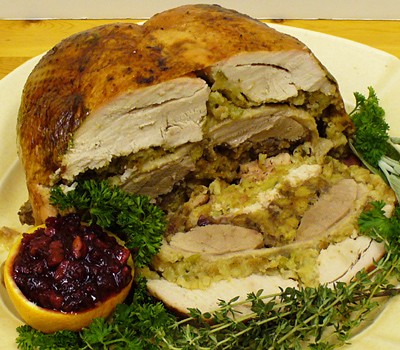 Thanksgiving countdown: only four days to go! Today's pretty much the last day you'll be able to buy your turkey of choice – after tonight they'll all be too big, too small or somehow not what you want, so get out there and do that shopping. Before you head out, though, here's some food for thought: Maybe this year you don't just do the usual brine-and-baste roast. Maybe you step out a little. Maybe you deep-fry, smoke, or poach your turkey ... or even prepare the infamous turducken.

Who better to walk you through the Deep-South arcana of fried turkey than Miss Paula Deen? She's still good for something, if that something involves too much butter and/or frying – which Thanksgiving most definitely does. Deep-fried turkey with Paula Deen

The Hearth, Patio & Barbecue Association (which is a thing that exists) says that 53 percent of consumers "plan to cook their turkey outdoors on grills, barbecues or smokers this year" ... this seems insanely unlikely until you realize that that's just 53 percent of people who would answer a survey by the Hearth, Patio & Barbecue Association. Regardless, smoked turkey is delicious and the leftovers will be epic. Try it. CHOW.com smoked turkey recipe

Now poaching a turkey sounds crazy ... but I've actually eaten it and it's beyond amazing. Slices of poached turkey breast fanned out on a platter make for a refined and unusual Thanksgiving, and super-juicy chunks of it on French bread make one of the best sandwiches you've ever eaten. A two-part recipe from the original Gourmet cookbook can be found in a Google books search (how to poach on page 386, and a preparation involving a lemon marinade and a pine-nut-and golden-raisin topping on page 383). Get more inspiration from this cook-though-the-book blog: Gourmet All the Way, No. 148

Or just go HAM and make a turducken: a chicken inside a duckling inside a turkey. This is some Henry VIII-level stuff, but what the hell, Thanksgiving comes but once a year. Just don't let me catch you beheading your wife after dinner. How to make a turducken

Tomorrow: three awesome stuffings, and the debate over whether you should stuff the bird or cook separately.