Three days until Thanksgiving: Three ways to shake up tradition 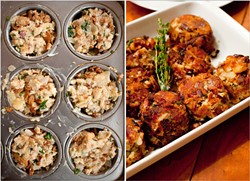 Just three more days until it's turkey time! You might have everything planned already, checking tasks off your master list in an orderly and self-satisfied way. Or, you might be wishing you could break the bonds of tradition, shake off all the rules, get wild!

Well first of all, settle down – this is just Thanksgiving dinner, not your only chance in this lifetime to be SPECTACULAR SPECTACULAR. But on the other hand, if you're feeling hemmed in, there are a few ways to get creative that might ease that artistic yearning (or desire to shock) within. With stuffing.

Step One: A baby step. Individual stuffing muffins. Not too crazy, just a single toe dipped in the river of everything-doesn't-have-to-be-the-same-every-year,-does-it? Stuffing muffins (New York Times)

Step Two: An intermediate step in breaking with tradition; a bold step toward reclaiming the day and liberating the cook, with just a dash of space-age TV dinner. Thanksgiving in one dish flirts with the idea that maybe this doesn't have to be a four-hours-at-the-table, all-day-in-the-kitchen affair? Thanksgiving in a Dish (Allrecipes)

Step Three: You, sirrah, have no respect for ritual, for custom, for orderly society. Why