Seven things you should know about Thanksgiving

November 26, 2013 at 6:04 PM
comment
Some Thanksgiving trivia, while you count down the hours until America's Most Gluttonous Holiday begins ...

7. The first TV Dinner cooked up by Swanson was basically a the company's Thanksgiving Day leftovers – in 1953, the company found itself left with 260 tons of unpurchased turkey after the holiday. The company asked employees for inventive ideas to get rid of the surplus. On inventive employee suggested that they turn it into Thanksgiving Day frozen dinners. According to The Learning Channel: "They packaged turkey, corn bread stuffing, peas and sweet potatoes and hung their advertising campaign on the newest craze to hit the nation: TV. That year, Swanson sold more than 25 million TV dinners to hungry Americans, at 98 cents per package. TV dinners were a hit." 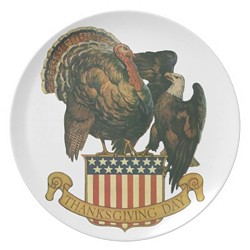 6. According to the National Turkey Federation, Benjamin Franklin wanted the turkey to be named the official bird of the United States: "Franklin ... was dismayed when the bald eagle was chosen over the turkey. Franklin wrote to his daughter, referring to the eagle's "bad moral character," saying, "I wish the bald eagle had not been chosen as the representative of our country! The turkey is a much more respectable bird, and withal a true original native of America."

The Turkey, Texas Bed and Breakfast. All you can eat ribeye on Friday nights!

Bob Wills: Not a turkey.

Dark meat. There will be lots and lots of dark meat.

4. An estimated 2,000 Thanksgiving Day fires in residential buildings are reported to U.S. fire departments each year, 69 percent of which are caused by cooking.

You can never have too much pie. Via

3. The New Bremen Giant Pumpkin Growers baked the Guinness World Record-winning pumpkin pie back in 2010, weighing 3,699 pounds and sitting 20 feet in diameter. The pie was created with 187 cans of pumpkin, 233 dozen eggs, 109 gallons of evaporated milk, 525 pounds of sugar, 7 pounds of salt, 14.5 pounds of cinnamon and 3 pounds of pumpkin pie spice. (source: delish.com) 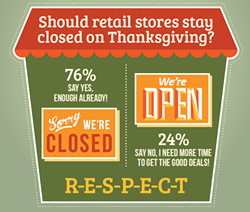 Just say no. Via KRC Research

Yes, sir, Officer Obie, I cannot tell a lie, I put that envelope under that garbage."

1. 1965: The arrest of an 18-year-old Arlo Guthrie takes place. Said arrest eventually leads to Guthrie writing the 18-minute-long epic song “Alice’s Restaurant,” which some radio stations still play as a Thanksgiving tradition. The upstate New York paper where the arrest took place wrote the following about the incident:

“Saturday, Richard J. Robbins, 19, of Poughkeepsie, N. Y., and Arlo Guthrie, 18, of Howard Beach, N. Y., each paid a fine of $25 in Lee District Court after pleading guilty of illegally disposing of rubbish. Special Justice James E. Hannon ordered the youths to remove all the rubbish. They did so Saturday afternoon, following a heavy rain. Police Chief William J. Obanhein of Stockbridge said later the youths found dragging the junk up the hillside much harder than throwing it down. He said he hoped their case would be an example to others who are careless about disposal of rubbish. The junk included a divan, plus nearly enough bottles, garbage, papers and boxes to fill their Volkswagen bus. ‘The stuff would take up at least half of a good-sized pickup truck,’ Chief Obanhein said. The rubbish was thrown into the Nelson Foote Sr. property on Prospect Street, a residential section of Stockbridge consisting largely of estates on the hill across from Indian Hilil [sic] School. Chief Obanhein told the court he spent ‘a very disagreeable two hours’ looking through the rubbish before finding a clue to who had thrown it there. He finally found a scrap of paper bearing the name of a Great Barrington man. Subsequent investigation indicated Robbins and Guthrie had been visiting the Great Barrington man and had agreed to cart away the rubbish for him. They told the court that, when they found the Barrington dump closed, they drove around and then disposed of the junk by tossing it over the Stockbridge hillside.”