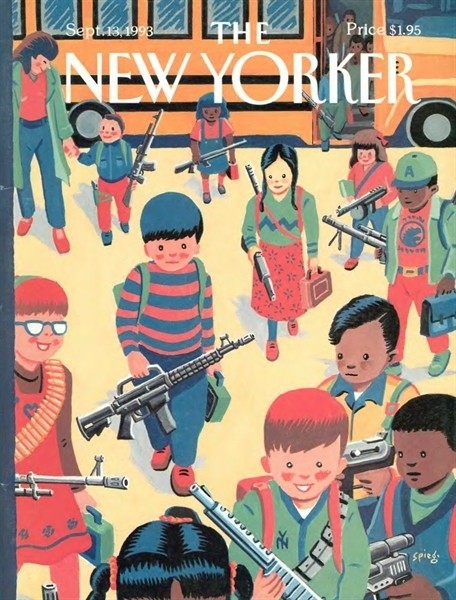 YOU GUYS, IT’S TOTALLY COOL TO BRING YOUR FIREARMS ON CAMPUS BECAUSE WHAT COULD POSSIBLY GO WRONG?: In a lengthy decision that prompted a strong dissent as well as multiple concurring opinions, the appeals court ruled that the Florida Legislature has pre-empted the regulation of guns by local governments and state agencies. The court decided the state's 12 public universities are covered by this 2011 law. The ruling notes that while universities have the power to restrict lawful conduct — like drinking or smoking on campus — that power does not extend to regulating guns. (via Daytona Beach News-Journal)

AW, MAYBE THIS CHRISTMAS YOU’LL FIND YOUR FOREVER HOME, SPIKE! ALSO, DISTURBING: Re-homing is a term often used by people seeking new homes for pets. Reuters found that on average a child was advertised for re-homing at least once a week, the average age of the child advertised is 6 to 14 and that the Interstate Compact for the Placement of Children is often not enforced. People who no longer want to be an adoptive parent have been using Internet message boards to offer to sign over legal guardianship of children to strangers. Reuters documented the severe abuse of children who have been passed around that way. More than 5,000 posts were analyzed over a five-year period. Many of the children involved are international adoptees. (via thefloridacurrent.com)

THESE CUTS AND SORES THAT WON’T HEAL WITH TIME OR WITH AGE:

MEANWHILE, THINGS ARE GETTING AWFUL IN THE UKRAINE. OR AWESOME?: The chaotic nighttime raid began when police broke through heavily-reinforced barricades and charged into the protestors—often falling into them because of the ice— who were yelling "Peaceful Protest! Peaceful Protest!" Some of the protestors reportedly sprayed the police with water. The confrontations continued all night, but by 11 a.m., most security forces had left the plaza while the protestors remained. "They attacked us, but we drove them back," opposition leader and former interior minister Yuri Lutsenko shouted from a state, according to BuzzFeed. "[President Viktor] Yanukovych's plan didn't work!" (via Gawker)

THIS SONG, OF COURSE

FOR UNLAWFUL CARNAL KNOWLEDGE, OR FUCK!: In 2009 the Delhi High Court ruled unconstitutional a section of the penal code dating back to 1860 that prohibits "carnal intercourse against the order of nature with any man, woman or animal" and lifted the ban for consenting adults. The Supreme Court threw out that decision, saying only parliament could change Section 377 of the penal code, widely interpreted to refer to homosexual sex. Violation of the law can be punished with up to 10 years in jail. (via Orlando Sentinel)