10 gifts for the Disney Parks-obsessed

December 20, 2013 at 11:34 AM
comment
There are certain Disney Parks items I always see average tourists wearing and toting alongside their fanny packs, Crocs and brightly colored shirts that say “JONES FAMILY REUINION 2013” in Disney font. Among these are Mickey Mouse baseball caps, traditional sets of Mickey ears and overpriced water bottles. They are usually accompanied by their owner attempting to maneuver a quadruple-seater stroller among unruly crowds of similar tourists. The stroller wars are my favorite. And by favorite, I mean worst nightmare and one of the 239,847,382 reasons I don’t venture onto Disney property between June 1 and Aug. 31 unless I’ve had a shot or three. Anyway, this run-of-the-mill merch won’t do for a Walt Disney World aficionado; he or she needs something more substantial, like this:

A crystal Cinderella Castle. It’s only $37,500. Chump change. For those of us with shallower pockets, though, WDW has some cheaper options as well. 1. For the New Disney Parks Enthusiast: Pin Lanyard Starter Set

Pin Lanyard Starter Set I got sucked into introduced to the world of pin trading a few years ago, and it’s such a fun hobby. At Epcot’s pin-trading stand near Spaceship Earth, they even have tables set up where people bring their huge collections of pins to trade. This is a perfect gift for someone just getting into Disney Parks culture. WHERE I FOUND IT: These sets are literally everywhere, but my favorite places to find them are the stand I mentioned above and Disney’s Pin Traders on Downtown Disney’s Marketplace side. Next page: Gifts or the veteran, the know-it-all, the adventurer ...

These shirts primarily say “I’m from Orlando” and/or “I don’t have a life” and/or “I’ve spent my life savings on trips to Disney. YOLO.” Either way, they’re probably the least touristy shirts WDW sells, and really cool-looking. Case in point: the ones displayed next to these were tie-dye. WHERE I FOUND IT: MouseGear, Epcot (but I’ve seen them around elsewhere)

3. For the Know-It-All: Nerdy Book 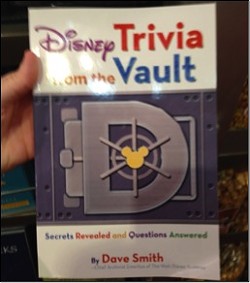 Is there a person in your life who is an endless reserve of Disney Parks trivia? Don’t get them any of these items, because they’ll be even more annoying. But if you want to get them for yourself to show them up/piss them off, that’d be a respectable investment. WHERE I FOUND IT: There are tons of options in most stores I’ve been in.

Searching for Hidden Mickeys is so fun. I prefer doing it without a guide, but not everyone is as stubborn as me, so this could easily generate a ton of fun days for your average Disney Parks lover. Or if you’re feeling really adventurous, you could take your would-be gift recipient on a trip over to the remains of Discovery Island*. But I wouldn’t recommend that, for obvious reasons. Long story short, you didn’t hear it from me. WHERE I FOUND IT: Mickey’s Star Traders, Tomorrowland, Magic Kingdom. *No but seriously, don’t do this. You’ll be eaten by gators, get a bacterial disease, and/or get arrested. Next page: Gifts for the foodie, the kid at heart, the character lover ... 5. For the Foodie: Cookbook or Kitchen Appliance

There are stores dedicated to kitchen items that have a plethora of gift options for your favorite chef. I thought the tea kettle looked really neat and very Disney without being too cheesy, but anything you can dream up, they’ll have. WHERE I FOUND IT: Ye Olde Christmas Shoppe, Liberty Square, Magic Kingdom.

6. For the Kid at Heart: Attraction Toy or Game

Only the most authentic WDW toys and games will do for the Disney Parks nerd. Also, can we talk about the irony of there being a Haunted Mansion version of LIFE? Of all the games they could’ve chosen. I kind of love it. I hope next they do a Swiss Family Robinson version of Monopoly next. The treehouse could be Boardwalk and when you pass “Go,” you could collect coconuts. Also, I’d buy a Dumbo-themed version of this ridiculous game from my childhood, but I feel like it’d confuse children. WHERE I FOUND IT: MouseGear, Epcot (Spaceship Earth toy); Magic Kingdom (LIFE game) 7. For the Character Lover and/or Person with No Shame: Fun, Modern Set of Ears So it’s a bit of an unspoken rule that Orlando locals don’t really wear traditional Mickey ears to WDW. I used to wear a traditional Minnie headband, but I’m special. I’d also take it off after a couple hours because it hurt my head. The struggle is real.

However, WDW changed the game when they came out with these bad boys:

Basically any hero or villain you could think of has his or her own themed set of ears – even Gaston. Gifts for the entire WDW-obsessed family? Done. Also, I’m getting those bride and groom ears next year when we get married, and I’m not sorry. WHERE I FOUND IT: Everywhere. Next page: Gifts for the music junkie, the techie, and those whose noses know ...

8. For the Music Junkie: Parks-Exclusive Soundtrack

I know people who can sing entire attraction songs and/or recite their dialogue. I may or may not be able to do this for the Haunted Mansion and Tower of Terror. I’m not proud of it. But I’d still appreciate this as a stocking stuffer. WHERE I FOUND IT: Mickey’s Star Traders, Tomorrowland, Magic Kingdom.

9. For the Techie: iPhone Cover

There is a wide variety (from attractions to characters), and they’re available for many different iPhone models. I’m almost dorky enough to buy one of these for myself, but they’re like $40, and I’m too cheap. WHERE I FOUND IT: MouseGear, Epcot. 10. For the Guy/Gal Who Won’t Shut Up About Finding a Cart that Sells Turkey Legs or Mickey Ice-Cream Bars on Every Damn Trip (aka Me): A Disney-Food Car Air Freshener

Naturally, this is my favorite addition to this list, because it’s directly related to food. They smell exactly like the items they’re based on — especially the turkey leg. The only downside is that these aren’t edible ... or are they? On second thought, maybe this could be a good gift for the Adventurer, too. And the foodie, obviously. WHERE I FOUND IT: Emporium, Main Street U.S.A, Magic Kingdom. Happy shopping!