Things to love about the holidays at Walt Disney World

December 27, 2013 at 5:06 PM
comment
Walt Disney World really outdoes itself every year, as far as holiday events and decorations go. They market their yearly Mickey’s Very Merry Christmas Party with promises of a holiday version of their Wishes fireworks spectacle, a Christmas parade, “snow” on Main Street and my personal favorite: free cookies and hot chocolate. 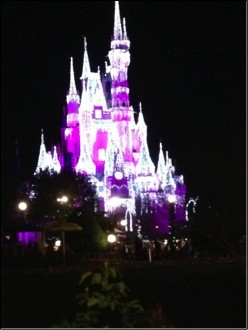 Oh, and an icicle-lit Cinderella Castle. That’s not to mention the Candlelight Processional at Epcot and the beloved Osborne Family Spectacle of Dancing Lights at Disney’s Hollywood Studios. The holidays at Walt Disney World aren’t complete without these. But this year, I found a lot of cool holiday events going on that I’d never experienced before. These are a little more off the radar as opposed to the big boys discussed above, like: Santa’s Village – America Pavilion, Epcot

This little sectioned-off part of the America Pavilion is an entire Christmas experience. You can buy train sets, Precious Moments dolls that look like Disney characters, Santa hats and everything in between. And of course, view the huge Christmas tree right in the center.

Nothing compares to seeing this show in person, and I think it’s actually a million times cooler looking than the fireworks. It’s worth staking out a spot 30 minutes before the fireworks are set to begin — the rides can wait. That’s not to say don’t pick a spot near a ride you want to go on right afterward, because it could mean the difference between a five- and 30-minute wait if you dilly dally. The more you know: Disney Parks edition. Joyful! Gospel Group – Epcot I came across this act as I was leaving the park, and I’m so glad I caught it because they were absolutely fantastic. A wonderfully talented group of people putting a gospel spin on Christmas classics – what’s not to love? A Totally Tomorrowland Christmas Show – Mickey’s Very Merry Christmas Party, Magic Kingdom The Story of Kwanzaa – America Pavilion, Epcot Mulch, Sweat, & Shears – Disney’s Hollywood Studios   Anything else worth mentioning, dear readers – particularly at Animal Kingdom?