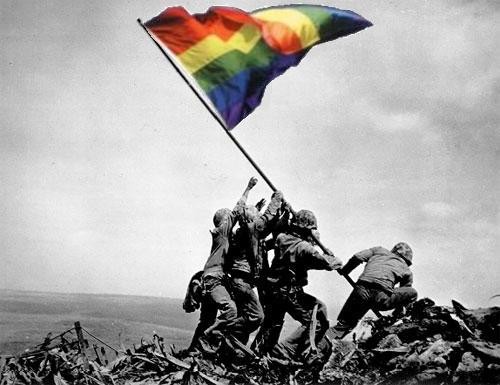 we petition the obama administration to:

Direct the Department of Defense to automatically change the DD214’s of service members discharged for being gay.

The repeal of “Don’t Ask Don’t Tell” left separated service members seeking to have their DD 214 discharge papers corrected with a cumbersome, complicated and time consuming administrative remedy. This remedy afforded by statute requires a veteran Honorably separated for a “Homosexual Act” or “Homosexual Admission” to write a lengthy legal brief to accompany an application for relief and then wait for the relief to be granted by the respective Board for Correction of Military Records. Veteran’s discharged Honorably for homosexuality are automatically presumed to not have any “aggravating factors” in their discharge and therefore should be worthy of a simplified process. Streamline the process by statute, executive order or BCMR policy; it saves everyone time and money!

You know that thing when you think everything has been fixed after legislation has been passed, how everything is vetted through an immediate corrections process that rights all the wrongs that came before said legislation. Yeah, well, no. On Jan. 30, Sen. Brian Schatz, D-Hawaii, filed a bill titled the Restore Honor to Service Members Act, with the support of high-profile Sen. Kirsten Gillibrand, D-N.Y., who told the Washington Blade “A clean, honorable record is long overdue for veterans who were discharged solely because of who they love. Our veterans served our country courageously and with dignity and we must act to give them the appropriate recognition they deserve." You don't say. Anyway, at least Democrats seem to get this one. Seventeen legislators have joined on in support, but that's hardly enough. ROLL CALL! Mark Udall, D-Colo., Mazie Hirono, D-Hawai‘i, Amy Klobuchar, D-Minn., Al Franken, D-Minn., Mark Begich, D-Alaska, Gillibrand, Ed Markey, D-Mass., Ron Wyden, D-Ore., Michael Bennet, D-Colo., Ben Cardin, D-Md., Maria Cantwell, D-Wash., Chris Murphy, D-Conn., Barbara Boxer, D-Calif., Robert Menendez, D-N.J., Martin Heinrich, D-N.M., Cory Booker, D-N.J., and Charles Schumer, D-N.Y. WHERE ARE YOU FLORIDA?

Sen. Brian Schatz (D-Hawaii), the chief sponsor, said “Don’t Ask, Don’t Tell” repeal was “a watershed moment,” but his bill would address remaining issues for the estimated 114,000 service members expelled because of their sexual orientation since World War II.

“Yet thousands of former service members still bear the scars of that discrimination, with their military records tarnished with discharges other than honorable and marks on their records that compromise their right to privacy,” Schatz said. “Many of these brave men and women that served our country are currently barred from benefits that they earned and are entitled to, and in the most egregious cases they are prevented from legally calling themselves a veteran. This needs to be corrected now.”

As a consequence, these former troops may be disqualified from accessing certain benefits, such as GI bill tuition assistance and veterans’ health care, and may not be able to claim veteran status. In some cases, they may be prevented from voting or have difficulty acquiring civilian employment.

Even troops who received “honorable” discharges may have difficulties in the aftermath of their service because their sexual orientation may be identified as the reason for the discharge.

Although an administrative process already exists for service members to change their records, the proposed legislation would streamline the process to ensure these designations don’t impair former members of the armed forces.