John Rivers' latest venture, the Coop, will do for fried chicken what 4Rivers did for brisket

February 12, 2014 at 6:07 PM
comment
Today we got a preview of what to expect from John Rivers' latest venture, The Coop, and we're pretty sure that the Coop is going to do for fried chicken what 4Rivers Smokehouse has done for brisket. In other words, expect to be standing in line when The Coop opens up at the corner of Morse Boulevard and Pennsylvania Avenue in Winter Park this spring.

Southern fare, naturally, is the focus of the menu – the very web address is ASouthernAffair.com – but you'll also find some scaled-back NOLA staples, as well as dishes indicative of Rivers' Carolina Low Country roots, like shrimp perloo (a jambalaya-like rice dish) and chicken bog (a moist rice dish of pulled chicken). The star, of course, is the fried chicken, which Rivers says took him more than a year to perfect. (This interview with Rivers on Food Republic is illuminating.) The result, in case you're wondering, is outstanding. See photos of said chicken, along with other menu highlights, below.

Fried chicken and waffles (the bourbon-maple drizzle is ridiculously good) 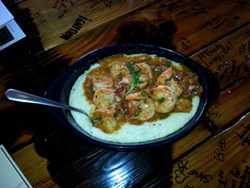 No true Southerner can resist a Moon Pie

and these are house-made.