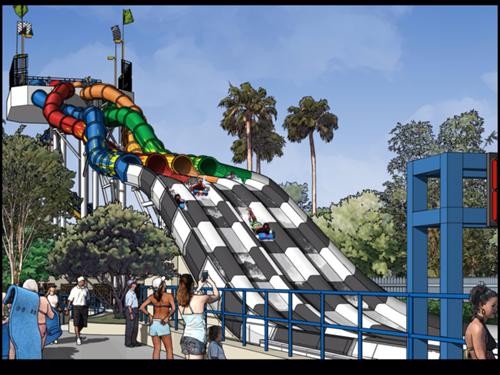 Hold onto your bathing suits, water park fans; a groundbreaking new thrill slide is breaking ground at Wet 'n' Wild on International Drive. The park boasts that Aqua Drag Racer will be "Florida’s tallest and fastest water-based racing attraction of its kind," and will feature four intertwined six-story-high slides. Riders will reach speeds of 15 feet per second (about 10 miles per hour) as they "compete" to cross the finish line first.

Interestingly, SeaWorld's Aquatica used similar language last November to describe their 2014 addition, Ihu's Breakaway Falls, a gecko-themed (seriously!) attraction that "will be the tallest, steepest and only multi-slide ride of its kind in Orlando." But that's about all they've said or shown; at least Wet 'n' Wild has some concept art to share.

It's also worth wondering what this investment says about the long-term future of Wet 'n' Wild itself. Universal Orlando now owns the park and the land around it, and industry-watchers have suggested that the expansion-happy resort might build a new water park in a different location, and redevelop a Wet 'n' Wild's current location. I still think that may be in Universal's long-term plans, but the park seems safe for at least another couple years.

There's no official opening date for the attraction yet, other than a vague "Summer 2014," which seems to be Universal's refrain these days (see also: Harry Potter's Diagon Alley expansion across the street).