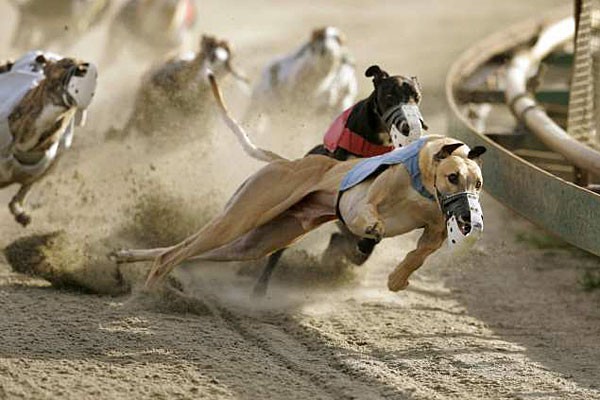 It turns out that during 2013, the Sanford-Orlando Kennel Club was the third most lethal racetrack for Greyhounds in the state. The numbers come from a recent report illuminating canine deaths at Florida’s dog tracks.

The response ABC 7 got from the American Greyhounds Council’s PR specialist, Marsha Kelly, was indignant and predictable damage control.

"GREY2K is out to eliminate the industry and abolish the industry, so I'm not sure they’re a credible source of information on the issue," Kelly said.

That seems like an over-defensive remark, considering that kennels are required by law to report canine deaths to the Florida Department of Business and Professional Regulation. All GREY2K USA did was echo those numbers in a single PDF file.

Even worse, Jack Cory, a lobbyist for the Florida Greyhound Association chimed in with some ridiculous comparative logic, because that's what lobbyists do: "One early death of a Greyhound is too many, BUT unfortunately accidents and illness happen with death resulting everywhere in Day Care Centers,'' Cory wrote, according to the Tampa Bay Times. "Nursing Homes, Hospitals even at DCF, where 432 Children died from Abuse and Neglect in 2012. I am not comparing a Greyhound to a Child but accidents and illness do happen with death resulting! They are unfortunate and many could be stopped with our 3 point safety plan!"

We took a look at the report, called “The Final Lap,” and found that eight Greyhounds were reported to have died in the SOKC, which puts Sanford’s track behind only the Daytona Beach Kennel Club and Derby Lane, which each had 12 deaths in the same period.

Four of the Greyhounds at SOKC died of injuries or vaguely-listed reasons that took place on the day of a race, while the other half died of illnesses or other mishaps. GREY2K’s whole crusade against dog racing revolves around the fact that canines suffer life-threatening injuries in order for gamblers to get their fix, so while eight deaths may not seem like much to the outside eye, the fact that half of those dogs perished after racing accidents kind of proves GREY2K’s point.

Below is a list of the fallen pooches from Sanford:

June 13, 2013: A 2-and-a-half year old male Greyhound named AMF Vice Cop was euthanized after a tumor was found in his mouth.

June 20, 2013: A 3-year-old male Greyhound named Skeeter Getter died on the day he raced. No details were provided except for the fact that he finished last. (This might indicate a broken bone, a common injury according to GREY2K USA, but cynical minds might assume a darker reasoning.)

July 5, 2013: At nearly 2 years old, female Greyhound Ds Ariel died on the day she raced. No details were provided minus a note that says she had difficulty on the first turn.

July 12, 2013: A 2-and-a-half-year-old female Greyhound named Where’s Too Bad was euthanized on the day she raced when she hit something, fell and did not finish the race.

July 15, 2013: WS Mellow Yellow, a 2-year-old female Greyhound, was destined for the Sanford-Orlando Kennel Club, but died in transit from Alabama.

August 23, 2013: Nitro Echo was a 2-year-old male Greyhound whose death is a mystery since no information was provided except that he didn’t race the day he passed.

October 25, 2013: The oldest of the Greyhounds on this list, Raider’s Rambo was 4-and-a-half years old. He went into convulsions and died during a seizure in the turnout pen, an enclosed space where dogs are let out of their crates to relieve themselves when nature calls.

November 29, 2013: Smooth Moves was a 2-year-old male Greyhound who died on race day when he collided with one or more other dogs in the “backstretch,” or the straightaway on the far end of the track. It’s unclear if the collision killed him, or if he was euthanized after the accident.

The full report from GREY2K USA is available at http://grey2kusa.org/pdf/FLdeaths.pdf.