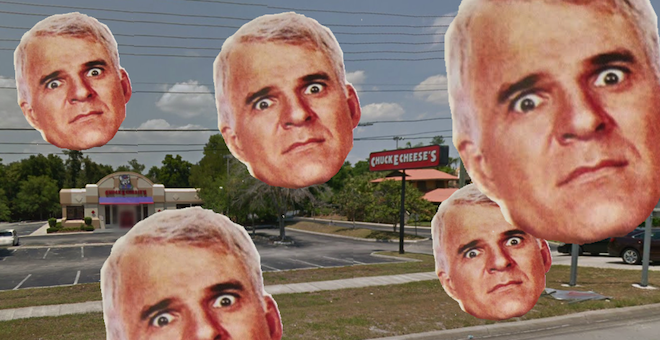 Driving by the Chuck E. Cheese on 436 in Altamonte Springs, nothing seems out of place for a Saturday afternoon. The parking lot is packed with cars as small familial hordes move to and from the entrance, children hopping about in that way they do when pizza and giant mice in extreme sportswear are imminent. Do any of these moppets have any idea they're shimmying on sacred ground? Well, sacred in the 1980s Steven Martin cinematic canon. This is the Chuck E. Cheese from Parenthood, Ron Howard's underrated 1989 dramedy starring Martin as a suburban father who grapples with all the difficulties that come with balancing career and family.

Parenthood (which takes place in St. Louis but was filmed mostly in the Central Florida area) features an all star cast, including but not limited to Mary Steenburgen, Jason Robards, Dianne Wiest, Rick Moranis, Martha Plimpton, Keanu Reeves and Joaquin Phoenix back when he was still going by Leaf. Let's not forget Tom Hulce, either, as Martin's deadbeat brother who shows up after a period of estrangement with an adopted son named Cool. Riding high with a 93 percent "fresh" rating on Rotten Tomatoes, it goes without saying this film is a wonderfully crafted glimpse inside the mechanics and dysfunction of the average American brood. Plus, there's projectile vomiting, so it should appease fans of the gross out.

One of the key plot elements in Parenthood is the emotional fragility of Martin's eldest child, Kevin, a boy who breaks down crying and hyperventilating at the most tiny of stumbles. What should have been a fun family outing to the ShowBiz Pizza turns very sour when another kid steals Kevin's arcade money, launching a debate between Martin and Robards (playing Martin's father) over how the matter should be handled. Then, poor Kevin misplaces his retainer and all hell breaks loose.

We've all  been in a nightmare situation like this, or at least witnessed it from afar. Either way, the scene nails the acute discomfort and sadness of such a breakdown and I personally could not watch this YouTube clip more than once.

ShowBiz Pizza, a national arcade and food chain founded in Missouri in 1980, was already having financial troubles when Ron Howard showed up to their Altamonte Springs location. Unfortunately Parenthood did not kick off a trend of families rushing off to their own local ShowBiz to re-enact the lost retainer scene. On the brink of ruin, in 199,0 a bold "concept unification" occurred between ShowBiz and one-time competitor Chuck E. Cheese in which all the former stores were transformed into the latter. Sad, but this swift move could not stamp ShowBiz out of the hearts of true fans: a large ShowBiz community exists online, and the restaurant's original animatronic band of anthropomorphic animal characters, the Rock-afire Explosion were the subject of their own documentary in 2008.

Meanwhile, the Altamonte Chuck soldiers on, providing area yard monsters the opportunity to experience all the thrills of a traditional carnival with only a fraction of the weirdness. Somehow this particular Charles E. Cheese has avoided the controversies of numerous other locations, i.e. mold issues and gun play. Let's just chalk that up to the residual magic of Hollywood's eternal good guy Ron Howard.