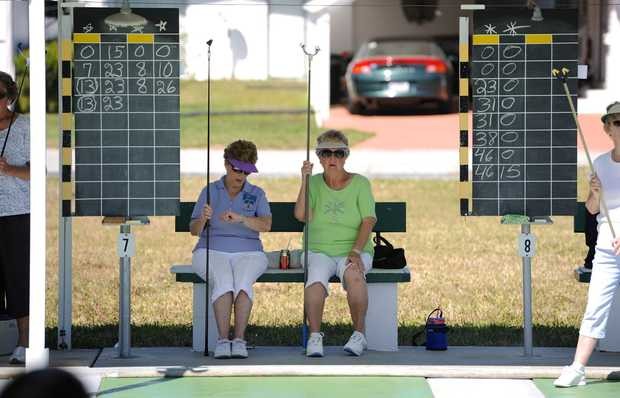 A pair of the accused Shufflelettes. Photo by Paul Videla.

Controversy struck this year's Shufflelettes shuffleboard tournament out in Bradenton; just minutes into yesterday's annual games, which have been held for over thirty years at the cozy Heather Hills Estates, the shuffleboard court's owners called police to have players removed from the property for not being pre-approved guests. Chris Stephens purchased the court (along with several other related amenities) in 2008 and says the Shufflelettes and their famous tourny have long ignored the senior community's "all guests must register at the front desk" policy, bringing in hordes of non-Heather Hills riff raff to participate in the greatest sport not recognized by the Olympics.  This year, Stephens finally put his foot down.

"We are not trying to be the bad guys here," said Stephens. "The reason we don't allow the general public in the clubhouse is because of liability. We live in a litigious world now. If someone falls, they will sue us."

Alas, the iron fist of Chris Stephens only halted the games temporarily: Manatee County officers who arrived on the scene informed the court owner that this particular shuffleboard issue was civil and must be settled in front of a judge (hopefully Judy!). The Shufflelettes shuffleboard tournament soon resumed, but many of the elderly players were shaken.

"We were playing, then all of the sudden we were told to go into the office and sign," Ethel Michel, who "trembled" at the sight of the arriving police, remarked. "All the years we have been shuffling, we have never had to go and sign our names to a sheet. The woman behind the desk was yelling, 'You don't have the right to be here.' I felt like I was trespassing. I won't bring our team back over here."

Chris Stephens stands by his decision to call the cops to break up the shuffleboard tournament.

"The shuffleboard court is for the use of residents and not Manatee County. They decided to have their tournament anyway and invite guests who were not approved."

Heather Hills homeowners association attorney Allen Bobo is siding with residents, stating that he believes they "have the right to invite guests." Bobo then slammed Stephens in the same breath by noting that "limited hours" for the management office make it difficult for all visiting guests to register.

"I think Chris is only there several days a week."

Sigh. Remember when it used to just be about the shuffling?