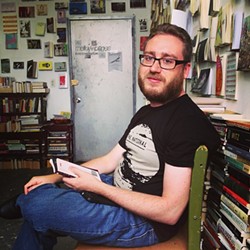 We ran a story in this week's issue about local poet Jesse Bradley's new book, but due to the constraints of print, we weren't able to show you any of the work. Here now, you can read a couple of the illustrated poems from the book.

“The Bones of Us began when my eventual ex-wife began moving out of our apartment in April 2010. The collection deals with the death of a marriage, of love, and the recovery from that death,” says Bradley.“The poems in the collection were written from April 2010 to March 2011.

“KMA Sullivan (YesYes Books publisher) came up with the idea of turning the poems into a graphic poetry collection when the manuscript was accepted in August 2011. YesYes Books found Adam Scott Mazer through Dolan Morgan, a Brooklyn-based writer. YesYes approached Adam with working on the book and he sent a couple of samples that floored us. YesYes signed him on to illustrate the entire book.”

Mazer’s input turns The Bones of Us from a typical chapbook into a black-and-white graphic novel charting Bradley’s year of anger and acceptance. Take a look (click to enlarge images).

"Closure," from The Bones of Us, by J. Bradley and Adam Scott Mazer (YesYes Books)

"Immunosuppression," from The Bones of Us, by J. Bradley and Adam Scott Mazer (YesYes Books)