Wes Anderson soundtrack box set to be released in 2014

33 of our best shots from the weekend in Orlando

I had the delight of attending the opening night of Stardust Video and Coffee's Wes Anderson tribute gallery currently hanging in the small room at the coffee shop, so if you've been looking for an eclectic piece from your favorite Anderson film, I can say it's definitely, definitely worth checking out. Of course, everyone knows the real reason for the gallery isn't to celebrate the quirky film mastermind but to have an excuse to throw a massive costume party on March 15 to cheers (and discuss) his newest release, The Grand Budapest Hotel (in theaters March 7).

Amid all this Wes Anderson love comes even more exciting news for superfans - Wes Anderson and his soundtrack sidekick, music supervisor Randall Poster, have announced a box set to be released later this year featuring all the music from the 10 films they collaborated on. Rolling Stone sat down with Poster and asked him to share his seven favorite score-and-scene combos, which ended up including Love's "Alone Again Or" from Bottle Rocket, the Clash's "Police and Thieves" from Royal Tenenbaums and the Bobby Fuller Four's "Let Her Dance" from Fantastic Mr. Fox. It was fun to take a short tour through the seven music videos they highlighted, and so I can only imagine the Zissou-sized adventure the full box set will provide.

And just in case you missed it, we reviewed The Wes Anderson Collection last year, a gorgeous book that our reviewer describes as "a pure submersion in the dream world Anderson has created." 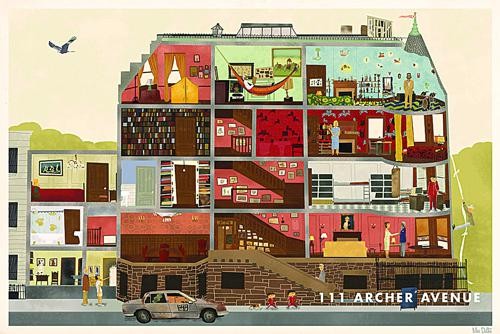