YOUR DAILY WEEKLY READER: on saving the alts, taking the piss and broken justice 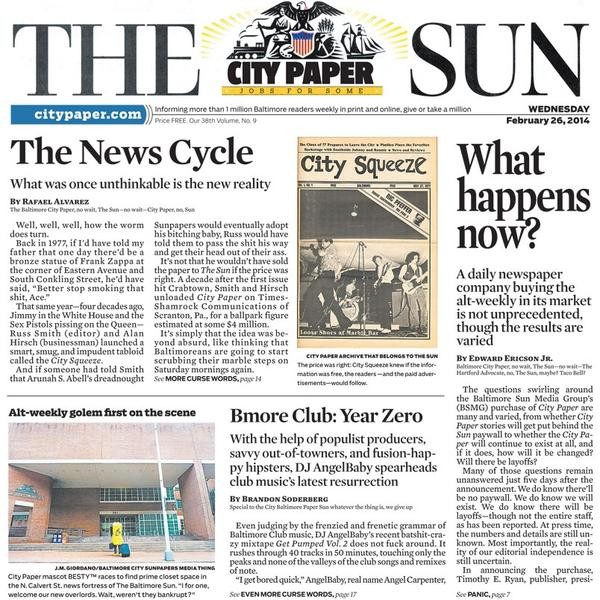 IT’S NOT OVER ‘TIL IT’S OVER. AS ALT WEEKLIES SHIFT IN PURPOSE AND PROMOTION, IT’S IMPORTANT TO REMEMBER WHAT WE ARE AND WHAT WE AREN’T: “WHEN the Baltimore Sun Media Group recently announced that it was buying the Baltimore City Paper, the local alternative weekly where I work as an editor, the prognosis for aggressive, independent journalism in Baltimore was pretty grim. Tom Scocca, a reporter who used to work at City Paper, declared that the city was now one step closer to being a ‘zero newspaper town.’ This glum outlook is understandable after the recent demise of venerable alt weeklies like The Boston Phoenix, which closed last year, while standard-bearers like The Village Voice have fired many of their most popular writers, like the longtime gossip columnist Michael Musto. Many have been bought by corporate conglomerates, then thinned out and tamed. Not that we get much sympathy: For many people, the alt weekly as a genre is already passé, rendered irrelevant by the rise of the Internet.  But an alt weekly is connected to a city in the way that a website can never be. In Baltimore, somewhere between 20 and 40 percent of the population doesn’t have regular Internet access. The glib techno-utopians who not only foresee a paperless tomorrow, but also lobby for a paperless present, are ready to forget about these people. Alt weeklies might not always reach everyone in the city, but at least, like the dailies, they try to be available and relevant to everyone.” (via New York Times)

IF WE’RE GOING TO CONSIDER A TOTALLY UNFAIR PRACTICE (AND AN EXPENSIVE ONE), THEN EVERYONE LINING THE BUDGETARY TROUGH SHOULD HAVE TO PISS, SAYS REPUBLICAN: Asserting that sobriety is essential in policy decisions, State Rep. Dane Eagle filed a bill to require drug testing for both judges and elected officeholders. The Cape Coral Republican’s bill (HB 1435) comes in the wake of controversies and legal battles over Florida requiring drug testing of state employees and recipients of public assistance. Eagle’s proposal adds to that the required testing of those elected to federal, state and regional offices, Florida Supreme Court justices, appeals-court and local judges. Officials refusing to take the tests would have to resign. Any positive results continue to the state Commission on Ethics, and the public official referred to employee-assistance programs. The intent of the bill is to ‘ensure that public officers are sober as they undertake their responsibility to make policy decisions that affect the health, safety and welfare of the citizens they represent.’ (via Saint Petersblog)

IN WHICH GOV. RICK SCOTT USES HIS STATE OF THE STATE RE-ELECTION SPEECH TO HAVE A RHETORICAL ARGUMENT WITH HIMSELF ABOUT THE STIMULUS: “Florida Gov. Rick Scott used his election-year State of the State speech Tuesday to draw a sharp contrast between his own "courage" in bolstering Florida's economy and the "terrible mess" left behind by his predecessor and probable fall opponent, former Gov. Charlie Crist. Setting the stage for a grueling fight in the most important governor's race of 2014, Scott took direct aim at Crist's record in a 30-minute speech dominated by short, punchy, declarative sentences and emotional references to his own hard-scrabble childhood, including ‘Christmas without any presents.’ ‘A lot has happened since I spoke to you last year,’ Scott told the Legislature on the opening day of the session. ‘I could talk about how our unemployment rate is now down to 6.3 percent; how our crime rate is at a 42-year low; how we have invested record funding in protecting our environment while our tourism industry is breaking records.’ Without mentioning Crist by name, Scott described a Florida "in a hole" and "in retreat" with 11 percent unemployment and $28 billion in debt in 2010, the year Crist opted not to seek re-election as governor and made an unsuccessful independent bid for U.S. Senate.Scott criticized Crist for taking billions of dollars in federal stimulus money that drove Florida's economy ‘into the ground.’ Crist has said that without the money, the state would have had to lay off teachers and conditions would have been much worse. ‘Some say these statistics were all because of a global recession,’ Scott said. ‘They say it doesn't matter who was running our state — that anyone would have been just a victim of the times. I disagree.’” (via Tampa Bay Times)

SOME STIRRING WORDS FROM A MAN STANDING AT THE EDGE OF DEATH (AND TEXAS): “The Justice system is truly broken beyond repair and the sad part is there is no way to start over. Improvements can be made. If honest people stand up, I think they will be made over time. I know the average person isn't paying attention to all the laws constantly being passed by state & federal legislation. People are more focused on their jobs, raising kids and trying to find entertainment in between time. The thing is, laws are being changed right and left.  A man once said that revolution comes when you inform people of their rights. Martin Luther King said a revolution comes by social action and legal action working hand in hand. I'm not presenting any radical revolutionary view, the word revolution just means change. America changes as the law changes. Under the 13th Amendment of the U.S. Constitution all prisoners in America are considered slaves. We look at slavery like its a thing of the past, but you can go to any penitentiary in this nation and you will see slavery. That was the reason for the protests by prisoners in Georgia in 2010. They said they were tired of being treated like slaves. People need to know that when they sit on trial juries and sentence people to prison time that they are sentencing them to slavery.” (via Gawker)