Belle and the Beast cameo in new Mickey Mouse short 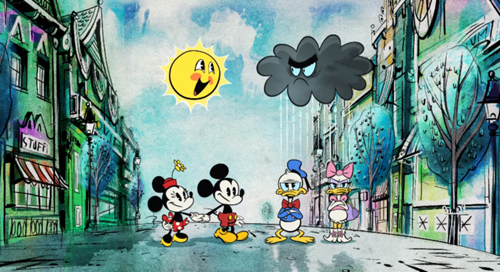 Both Belle and the Beast make a short cameo in Disney's new musical Mickey Mouse short, Adorable Couple. I've said this a few times now since Disney rebooted Mickey and the gang, but this might be my favorite so far.

The short finds Mickey and Minnie so happy in love with each other that they break into song about it while skipping hand-in-hand through the park. Meanwhile, Donald and Daisy aren't quite so lucky when it comes to happiness. When Mickey and Minnie try to bring them together and drive the rain cloud that follows them away, things don't go as they planned.

Director Paul Rudish and his team really outdid themselves this time, both on the musical aspects and the sight gags. Sure, we've seen the personal rain cloud before, but I've never seen it with a conclusion like this, and Minnie with the gumdrops... well, just watch it, it's only four minutes.

There was also a Valentine's Day themed Mickey short that I missed in my state of grumpiness called The Third Wheel, wherein Goofy tags along on Mickey and Minnie's romantic date.