March 12, 2014 at 11:43 AM
comment
If Tuesday was the “slow” day between the end of SXSW Film and Interactive and the beginning of SXSW Music, I can’t imagine how crazy things are going to get the rest of the week. Half-mile long lines for tickets to see Kanye West and Jay-Z, corporate-sponsored perks shielded behind arcane one-in, one-out policies, cashed-out free beer coolers, demolished courtesy taco plates

The name of the SXSW game is supply and demand – not enough of the former and way too much of the latter.

To kick off my SXSW experience, I caught an early 5 p.m. set at the Parish’s AudioFemme Meets SXSW Emerging Artists showcase from Savannah’s the Casket Girls, who head to Florida next week, including a March 21 show at Will’s Pub. Distressed beats by Ryan Graveface laid a foundation for the synchronized dance moves, sexy get-ups and heavenly harmonies of twin sisters Phaedra and Elsa Greene. And if the handful of songs I heard here, including album cut “Same Side,” are any indication, the Casket Girls are going to slay it with the luxury of a full headlining set. Extra points for the whomping drum crashes of drummer Peter Seeba, who lent the doomy dream pop a hard-nosed edge. 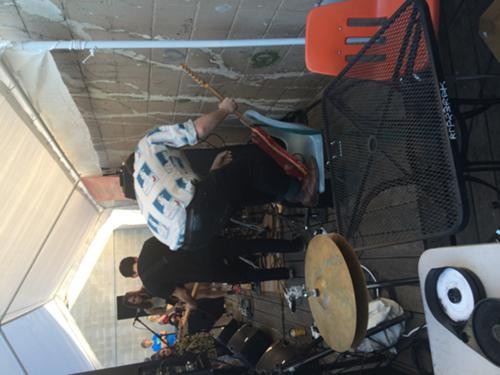 Speaking of edge, I was thrilled to see Massachusetts alt-rock quintet Speedy Ortiz in the comfy confines of Side Bar’s narrow back patio for the Harry Fox Agency day party – after two shows, I even momentarily thought, “Maybe I won’t have to wait in any lines all week!” Speedy Ortiz barely navigated Austin’s notorious rush-hour traffic to arrive for their 5:15 p.m. set time, but after frontwoman Sadie Dupuis and her band of merry noisemakers had everything set up, their drummer Mike Falcone put out a call for cymbals, adding a 30-minute delay to the proceedings. But the wait was worth it, as the band launched into its noisy, melodic histrionics, guitarist Matt Robidoux feeding back his ragged six-string on a plastic chair while Dupuis sang beautifully and smartly of twenty-something angst.

Riding that high, I jammed over to East Austin to catch Baltimore’s Future Islands, whose icy, theatrical synth-pop is on the verge of international takeover thanks to a jaw-dropping recent performance on Late Show with David Letterman at the Spotify House. Unfortunately, the band’s popularity is a hot commodity right now, with hundreds of concertgoers angling in four or five haphazard lines for a miniscule number of arbitrarily decided upon spots. Luckily, a back fence provided a narrow look at the stage and Samuel T. Herring’s passionate delivery and now-legendary dance moves, allowing a crowd of 50 outside to join the 200 or 300 inside in relative solidarity.

That Spotify cluster was rectified, however, at Pitchfork’s Show No Mercy evening metal showcase, organized by Pitchfork editor and epic beard man Brandon Stosuy at the Mohawk on Red River. Although the line of thrash aficionados and speed-metal freaks stretched down the block and across the street an hour before start time, everybody got in just in time to see Virginia five-piece Iron Reagan kick things off with a nuclear blast of one-minute blitzkriegs. My favorite moment came when singer Tony Foresta announced his band’s recent signing with metal overlords Relapse Records and upcoming free EP in conjunction with Decibel Magazine. “We’re gonna play five songs from our new EP,” Foresta said, “so hopefully you’ll give us two minutes of your time.” Now THAT’s heavy metal.

The Show No Mercy showcase definitely showed no mercy to weak ears, with metal band after metal band - Kylesa, Indian, Power Trip, Youth Code, Skeletonwitch — all the way until 2:00 AM. So I boogied back into the filthy, much more crowded land of Austin’s Dirty 6th St. to the Old School Bar & Grill, where Man Man drummer Christopher “Pow Pow” Powell dropped some danceable yet complex blips, bloops, and beats on a tiny crowd of maybe 25 gathered for the opening salvo of Hometapes & Team Clermont’s Official SXSW Showcase. Performing as Spaceship Aloha, Pow Pow’s grooves veered from psychedelic to summery to exuberant to chopped and screwed over the 40 minutes of his sole SXSW appearance, the only interruption coming when a blown breaker temporarily cut out his sound. The best part, however, was that up on the wood-grained 2nd floor of Old School there were no ridiculous lines and no jostling crowds — just a few new friends dancing in relative anonymity after a long opening day at the biggest music festival in the world.

The Orlando-based and Florida bands make their mark on Wednesday - emo-punk upstarts You Blew It!, former Orlando residents and mixmasters Alligator Indian, Gainesville punk royalty Against Me!, and Jacksonville electro-poppers SUNBEARS! among them. Hopefully the action will be worthy of that many exclamation points.