Suggestions for the new Kong attraction at Universal Florida 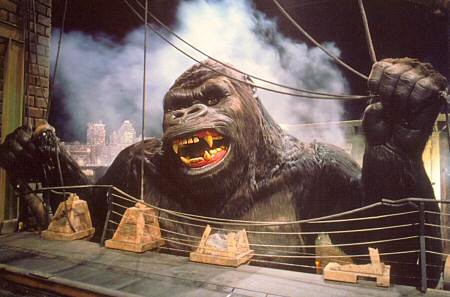 Key moment from the original Kongfrontation!

Last week Universal Studios filed an application for a demolition/"utility improvement" permit with Orlando officials, leading to speculation about what exact changes the amusement giant is planning to make. According to the folks at ThemeParkInsider.com, it can be confirmed that said permit pertains to one of two projects Universal is soon implementing: a fifth hotel on park property and a brand new attraction based around that most classic of film properties, King Kong. The massive furball previously spent twelve years captivating tourists at Kongfrontation!, one of Universal's earliest rides that simulated thrills from the 1976 Dino De Laurentiis Kong movie, which closed in 2002 to make way for a Mummy-themed roller coaster. Although Kong has remained a fixture at Universal Studios Hollywood as part of their famed backlot tour, here in Florida the go-rilla has faded into memory like so much Murder, She Wrote Mystery Theater.

Until now! Kong is coming back, allegedly, but what should he do? How will he fit into our madcap 2014 world? Please, Universal Brain Trust, consider some of the following options:

- Kongfrontation: Electric Kongaloo!, a remake of the original ride updated to duplicate today's Manhattan subway experience (you only get the chance to see Kong if you can locate the one MetroCard dispenser that can read your credit card's magnetic strip)

- King Kong Goes To Hogwarts, a brilliant piece of brand integration that would find the massive ape learning various banana-related conjuring spells from Harry Potter and all his wacky British pals in a hilarious 3-D movie presentation

- Smell The Wet Primate, a sensory explosion that could occupy an empty spot of that central lagoon

- King Kong's Murder, She Wrote Mystery Theater, a brilliant piece of brand integration that would find the massive ape trying to solve various crimes in New England alongside Angela Lansbury

- Skull Island Lost & Found, wherein the eighth wonder of the world looks after your misplaced umbrella and/or toddler

- Twister...Ride It Out With A Friggin' Three Story Monkey, wherein visitors can experience all the excitement of a tornado with the added bonus of a giant irritated ape

Laugh if you must, but all of these ideas are better than Universal Orlando's current King Kong representation: the chunk of parking garage named after Merian C. Cooper's most beloved creation. Fingers crossed USF gets it right and doesn't somehow force Kong to twerk with Optimus Prime in a Shrek-themed dubstep musical.