SXSW 2014 show reviews: Florida bands You Blew It!, Against Me!, Sunbears! Plus Perfect Pussy, Coachwhips and more

March 13, 2014 at 2:58 PM
comment
Rule No. 1 of SXSW: keep your phone charged. I learned this one the hard way when my phone died just as the sun set on the second day of SXSW Music. Not only was I not able to photograph the phenomenal nighttime showcases I attended, but my wife was worried sick waiting for me to get home after news broke that a drunk driver plowed through a crowd of music fans on Red River, killing two and injuring 23, at 12:30 a.m.

A tragedy like that makes talking about the 15 different shows you saw today seem frivolous, inconsequential, even straight-up sinful. But at SXSW, the show always goes on – surely the rest this week will feature plenty of thoughts and prayers for the victims and middle fingers raised in the face of drunk driving. So let’s dive right in. First, the Florida bands.

You Blew It! lead singer Tanner Jones celebrated his birthday yesterday, and at the Orlando band’s afternoon show at Liberty Bar in East Austin, their tightly wound blend of heavy/melodic emo-punk had everyone celebrating (the free beer from Brooklyn Brewery didn’t hurt). These genial gentlemen, who big-upped Gainesville friends Frameworks several times, also qualify as the most normal-looking band I’ve seen yet at SXSW – only one beard among the four of ’em – which says a lot at this giant hipster fashion freak show.

Laura Jane Grace of Against Me! made her own “fuck-you” fashion statement during the Gainesville band’s hard-charging 1 a.m. headlining set at Red 7 Patio. Wearing a form-fitting tank top with a pair of disembodied breasts plastered across it, I’m gonna go out on a limb and say Grace is the fiercest woman in rock & roll right now, even if new songs deal with her transition to transgender life in stomach-churning ways. But at 6’3” in black boots with a tangle of tattoos, fiery red hair and the most aggressive stage presence I saw the entire day, dedicated fans chanted every word of classics like “Don’t Lose Touch” and new jams like “Black Me Out” off recent album Transgender Dsyphoria Blues with equal fervor. I came away convinced that Against Me! might be the most anthemic punk band currently tearing up the stage.

Unconditional love: Photos from Against Me! at the Beacham

Jacksonville’s SUNBEARS! played an outdoor show on the beautiful creekside patio of a high-end Mexican restaurant at 11 a.m. yesterday, but the biting north winds and sparse morning crowd put a bit of a damper on the band’s cosmic Flaming Lips-esque psych-pop. Those challenges fell away, however, come 8 p.m. when the band put its enchanting light show to full use inside Javelina, a hip but welcoming bar in Austin’s no-frills Rainey Street District.

Now for the rest of the best: 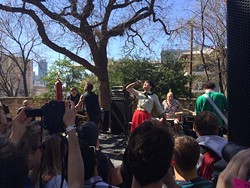