March 14, 2014 at 12:13 PM
comment
Thursday was a weird one at SXSW. The sun did shine chamber-of-commerce beautifully again, but the dark cloud of Wednesday night’s hit-and-run accident that killed two – a local Austin woman riding a moped with her husband and a Dutch music journalist – injured 23 and shook up the hundreds who witnessed it or were directly affected by it lingered over many shows. On my way downtown, I rode by the makeshift memorial outside the Mohawk on Red River, which cancelled all daytime shows before re-opening in the evening. And the heavy sight made me feel quite a bit less concerned with rushing around to see as many bands as possible or angling for the best iPhone shot – hope you’ll forgive me.

• Something about Gainesville-based art-pop quartet Hundred Waters’ most recent material (from an as-yet-unnamed new album to be released on May 27) felt right for the occasion, although I only caught a few snippets of their dark ambience from outside Empire Garage due to the 200-person-plus line queued up to get into the OWSLA BBQ. No doubt label head and EDM mastermind Skrillex’s set an hour after Hundred Waters had something to do with that – but I’ve got my express press passes (shhhh) for the Florida band’s Pitchfork-curated set tonight at Central Presbyterian Church, which should be downright heavenly.

• A similar fate befell my quest to see Orlando pop-punkers Wet Nurse. After biking three miles south of downtown to catch their 5:40 p.m. set at Whip-In, which hosted the awesome Lolipop/Burger Records SXSUDS Showcase, I found out the band’s set had been switched to 10 p.m. (yet another reason to keep your phone charged). So I hit up Beerland later to see Nina and Susanna Chaplin and Vanessa Brewster whip up a storm as part of the similarly awesome Chaos In Tejas showcase – but I was 30 minutes off on their set time and only heard their last two songs. Those were straight-up girl-power ragers, of course, and I’m excited to catch the band’s house show in South Austin on Friday afternoon. 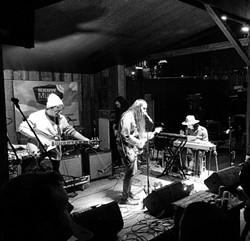 • I’ve always had a thing for Roadkill Ghost Choir – and not just because their soaring indie folk is damn divine, but also because they hail from DeLand, where I was born and raised. Pretty sure these guys are the biggest musical exports from good ol’ “Deadland” since Terrence Trent D’Arby, and their two shows at Blackheart, one day show and one night one that was part of the Madison House showcase, only solidified that notion. While I was thrilled to see them in Austin’s uber-hip and relatively uncrowded Rainey Street District, these guys deserve to be headlining some of the big Dirty 6th clubs. They did just make their network TV debut on Late Show with David Letterman in January, after all.

• As I mentioned earlier, I didn’t see nearly as much on Thursday as I did on Wednesday. New York post-punk youngsters Big Ups got a tight crowd throwing elbows at the Midgetmen’s Jumpstart Texas day party at Side Bar. Immediately afterward, Chicago-via-Boston folk-rock prophet Ezra Furman (go look him up – seriously underrated) and his band delivered by a howling, horn-filled, high-energy set. And the Wind-Up Records day party at La Barbecue in East Austin provided a nice respite from downtown, the tastiest brisket around and even an adorable baby pig to cuddle.

• But easily the best moment of the day came during Canadian hardcore band Fucked Up’s headlining 6 p.m. set at Pitchfork’s final afternoon party. Lead singer Damien Abraham, well known for performing with a hairy bare chest and belly, delivered the line of the day (possibly the whole week) when he said “Life is so fucking short and life is so fucking precious” to commemorate the previous night’s tragedy. One minute later, the shaved-head, full-bearded madman leapt into the crowd and hugged everyone in sight while delivering his life-affirming howls, proving that even the loudest, most abrasive music can connect humans in ways that few other art forms came.

Fucked Up at SXSW 2014, Photo by Nick McGregor

After that, with the sun setting on downtown Austin, a skywriting plane spelling out “Pi in the Sky” and 3.14159265359 in advance of 3/14 (AKA Pi Day), and the beautiful French Legation Museum grounds being packed up for the weekend, nothing felt more important than savoring the moment with those around me – old friends, new friends, strangers, spouses.

#Pi In The Sky, Photo by Shannon McGregor

OK, enough emotion – I hereby promise the Orlando Weekly faithful that I’ll be back at it hot and heavy all day Friday and Saturday.