7 awesome songs we discovered at SXSW 2014

Flesh Lights “I Am Romance”

I just Google’d “Fleshlights” to find the track for this. I just remembered what fleshlights actually are. That is a weird correlation. I tend to love a band with a female drummer that is so badass she also sings. These are the only flesh lights you will ever really need.

This band is good live. It’s a statement not to be taken lightly. Even the recordings make me want to stomp around in circles like a drunken warlord. They stab you with a knife of catchy, reverb-soaked vocals and aggressive guitars that differentiate them from a steady pool of over-saturated garage psych rock.

An echoed spell of punchy drums packed with scuzzy guitars. It should come as no surprise that they are opening for Ty Segall and their new album is on Castle Face. 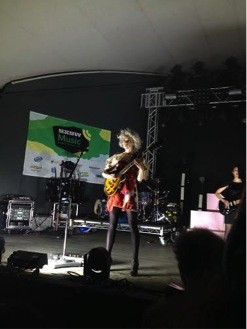 An incredibly infectious cut from the ingenious and innovative St. Vincent. Her live performance is damn near perfect. Inarguably the best I saw at SXSW. She does this thing where she shuffles around like a robot and slithers down a set of pink stairs as seen on her album cover. Watching her play guitar is like watching someone pluck fish from a river with their bare hands.

Mayavik is from Norway and shares a striking similarity to Olivia Newton John. Her show was packed with a bunch of old dudes, and her music is synth-laden, straightforward pop thriving on the coattails of popular '80’s dance music. Recommended for Paula Abdul.

She’s mildly reminiscent of a more soulful and less repetitive Little Dragon with a serious horn section. This horn section is so serious that they use iPads instead of, idk, sheets of paper? When she first strolled out on stage with her 10-plus-piece band and her child, I was among a crowd of equally confused onlookers. By the end some guy said, “It’s so weird that she covered that Milk Shake song.” Kelis shed that snakeskin, and now she’s back with a vengeance and a food truck; she makes mean jerk ribs.