Cowasaki: A motorcycle made from animal bones 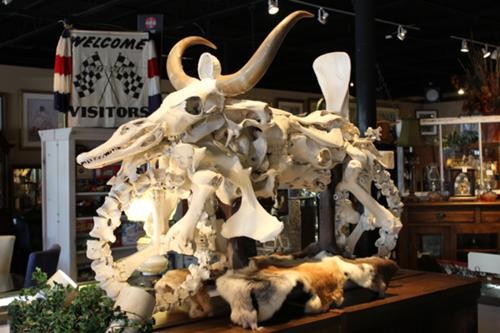 Got $55,000 to spend on a motorcycle that you can't even ride? That's how much  the "Cowasaki" pictured above is currently going for.  The bone chopper made its debut at Dunn's Attic Auction House in Ormond Beach as part of 2014 Bike Week. Only nine motorcycles like it exist in the entire world. Each wheel is  made out of the back of a cow, and in addition to the cow spines, the bikes normally consist of three to four cow skulls, a few alligator skulls and various bones from goats, wolves, raccoons, pigs and turtles. They take about a year to craft, and no two Cowasakis are exactly alike.

The creator of these bikes – Orange City, Fla., artist Reese Moore – has been making stuff out of animal bones since 1995, when he made an eight-foot T. Rex for his kids for Halloween. Moore eventually sold the dinosaur to a Daytona-area bar. While there, Moore joked with the owner of the bar about making a motorcycle, which the owner said couldn't be done. Moore took this challenge to heart and the rest is non-rideable-motorcycles-made-out-of-dead-animal-bones history.

If you'd like to see some of Moore's bone choppers, he's got work on display at a boat and motorbike museum in Georgia, a gun and pawn shop in Kentucky, Frogger's Saloon and Ripley's Believe It or Not. Currently, he's taken a step away from motorcycles and is working on a flying dinosaur.