YOUR DAILY WEEKLY READER: pesticides are dumb, Bill Nelson is smart, Mark Penn should go away 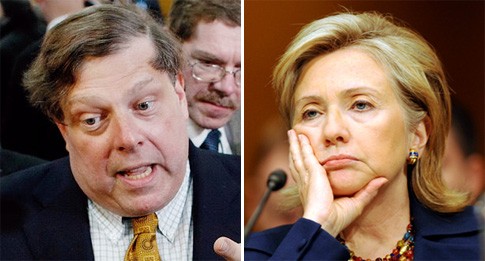 PESTICIDES ARE MAKING YOUR PERFECT BABY LOSE ITS MIND. ALSO, NO EATING MERCURY, KIDS: “Forty-one million IQ points. That’s what Dr. David Bellinger determined Americans have collectively forfeited as a result of exposure to lead, mercury, and organophosphate pesticides. In a 2012 paper published by the National Institutes of Health, Bellinger, a professor of neurology at Harvard Medical School, compared intelligence quotients among children whose mothers had been exposed to these neurotoxins while pregnant to those who had not. Bellinger calculates a total loss of 16.9 million IQ points due to exposure to organophosphates, the most common pesticides used in agriculture. Last month, more research brought concerns about chemical exposure and brain health to a heightened pitch. Philippe Grandjean, Bellinger’s Harvard colleague, and Philip Landrigan, dean for global health at Mount Sinai School of Medicine in Manhattan, announced to some controversy in the pages of a prestigious medical journal that a ‘silent pandemic’ of toxins has been damaging the brains of unborn children. The experts named 12 chemicals—substances found in both the environment and everyday items like furniture and clothing—that they believed to be causing not just lower IQs but ADHD and autism spectrum disorder. Pesticides were among the toxins they identified. ‘So you recommend that pregnant women eat organic produce?’ I asked Grandjean, a Danish-born researcher who travels around the world studying delayed effects of chemical exposure on children. ‘That’s what I advise people who ask me, yes. It’s the best way of preventing exposure to pesticides.” Grandjean estimates that there are about 45 organophosphate pesticides on the market, and “most have the potential to damage a developing nervous system.’” (via The Atlantic)

BILL NELSON’S GOT THE KEY, HE’S GOT THE SECRET: U.S. Sen. Bill Nelson told Florida legislators Wednesday he is secretly working with health officials in Washington to find a way to get around the Legislature's refusal to accept some $51 billion in federal funding for expanding the state Medicaid program. Nelson also said legislative budget writers now working on the state's fiscal 2014-15 spending plan are in for ‘a real shocker’ that could cost the state $600 million in lost federal funding, if they don't move toward compromise on Medicaid funding.  Gov. Rick Scott reluctantly endorsed Medicaid expansion last year, but the House adamantly refused to consider taking the federal money to provide Medicaid insurance coverage for about a million working-poor Floridians. House Speaker Will Weatherford, R-Wesley Chapel, noting that the federal government is already running massive deficits, said Washington can't be counted on to continue funding the expansion in future years -- so Florida taxpayers could be on the hook for it. ‘You would think, with what's happened, that there's no hope for Medicaid expansion,’ Nelson told the Senate Democrats. ‘The hospitals are losing money hand-over-fist as a result of not expanding Medicaid as it was under the ACA. In addition, the state of Florida is leaving over $50 billion of Florida taxpayers' money on the table, giving it to other states who are expanding.’ He said he has met with officials of the Department of Health and Human Services and the Centers for Medicaid and Medicare Services to see if a deal can be worked out to get the money to Florida anyway. Nelson said he hopes to be at liberty to go into details in a couple of weeks. (via The Florida Current)

IN WHICH THE TAMPA BAY TIMES GOES FOR THE BIG PUN BY REMINDING US ABOUT “GENERATION JOESERS” WITHIN THE LEGAL WEED ARGUMENT. MAMA, WE’RE ALL JONESING NOW: “Generation Jones, the youngest segment of baby boomers, is a very influential lot. Born between 1954 and 1964, GenJonesers are taking the reins of government and becoming a powerful draw for advertisers. In Florida, they are seen as a key demographic in the push to legalize medical marijuana when it's put to voters in November. ‘Jonesers have smoked far more pot than any generation before or after us, which has resulted in more toleration and acceptance of that drug — and comfort with its legalization,’ said Jonathan Pontell, the social commentator credited with coining the term Generation Jones. ‘Given what I'm assuming to be a large number of GenJones voters in Florida, combined with what I'm assuming to be a large number of Florida GenJones politicians and activists, this generation's role may be pivotal,’ he said. So, we decided to put some questions about that to John Morgan, founder of the heavy- hitting trial lawyer firm Morgan & Morgan — ‘For the People’ — and the man who funded and put a face on the effort that got medical marijuana on the ballot.  By the way, Morgan, born in 1956, is a GenJoneser himself.” (via Tampa Bay Times)

WELL, MARK PENN DOESN’T EXACTLY EXUDE CHARM, DOES HE? THIS HOUSE OF CARDS COULD DO WITHOUT A SLOPPY JOKER: “In recent weeks, I've talked to several Washington politicos close to Bill and Hillary Clinton, and when I've asked if they will be joining Hillary's presidential machine, should she run, I've received a variant of this (understandably) not-for-citation reply: If Mark Penn is involved, no f-ing way. Penn is famous—or infamous—for being the chief strategist for Hillary Clinton's 2008 presidential campaign of inevitability that turned into a colossal failure. That effort was marked by hubris, lousy messaging, poor strategic planning, and legendary internal tensions—including back-biting, leaks, and fierce inside politics—that many within the politerati blamed, fairly or not, on Penn. In the book Game Change, John Heilemann and Mark Halperin described the campaign as ‘a simmering cauldron of long-held animosities—most of them directed at Penn.’ It was personal: ‘[T]he rest of Hillaryland detested Penn personally. They thought him arrogant and amoral, a detrimental force whose perniciousness was amplified by his inexplicably tight bond with the Clintons.’” (via Mother Jones)