Location Matters: the Mud Dogs' football field from 'The Waterboy' 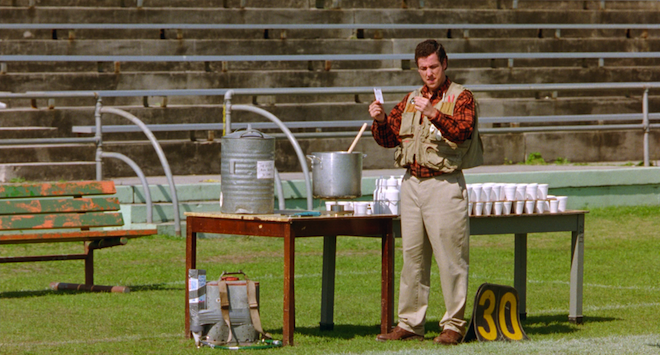 Location Matters is a series that reflects upon pieces of Orlando Central Florida immortalized in popular film.

I wish I could remember my initial reaction to the circa 1998 news that Adam Sandler would be filming parts of his college football farce The Waterboy in DeLand, Fla. I'm sure I felt disbelief. At the time I was finishing up high school in neighboring Deltona, but I hung out in DeLand every chance I could get. They had Side One, the best record store I'd ever been to in my life (it's still up there), and so many incredible thrift stores. Though cool to these suburban teenage eyes, DeLand was not exactly a celebrity haven. R&B sensation Terence Trent D'Arby lived there for a bit. Ted "Lurch" Cassidy went to college at Stetson in DeLand. These guys are great, but Adam Sandler was outshining them by miles in 1998. The guy was coming off The Wedding Singer, his biggest film hit to date. And now he was rolling into DeLand?

Oh, I was certainly a fan. Sandler's antics on Saturday Night Live always amused me ("Crazy Protractor Beard" still makes me chuckle). When his first comedy album came out my freshman year, I swooped it up and reveled in its (often quite literal) bathroom humor. I saw Billy Madison, Happy Gilmore and The Wedding Singer multiple times each in the theater and truly felt like I was witnessing some sort of important artistic birth. Maybe I'm just a senile old man, but it appeared like Adam Sandler had the potential to move into that rarified Bill Murray air. My only defense: Murray did a turd-eating joke once (Caddyshack) and now he's an Academy Award nominee. Stranger things have happened.

Unfortunately, I did not get to tag along with my friends the day they all appeared as extras when The Waterboy filmed at DeLand's Spec Martin Municipal Stadium, which through movie magic was transformed into the home of the fictional South Central Louisiana State University Mud Dogs (other parts of The Waterboy were filmed at Orlando's Citrus Bowl, but I really prefer to align that venue with the Orlando Breakers from Craig T. Nelson's Coach). A conflicting part-time shift at Taco Bell nixed my dreams of appearing on celluloid as part of the fake Louisiana landscape behind Sandler and co-star Henry Winkler. Fear of termination prevented me from calling in or switching said shift with a co-worker. What can I say? I needed the $4.75 an hour. That 1986 Ford Aero Star van I tooled around in wasn't going to pay for itself!

Jealousy coursed through my veins when pals later gushed over the friendliness of Sandler and Winkler at Spec Martin, and how much fun it was to get paid to sit in the vicinity of Adam the Great Comedy Supernova. These feelings rapidly dissipated when The Waterboy finally came out in November '98. I couldn't believe the mess that unraveled before me. A lazy hybrid of his Cajun Man and Canteen Boy characters, Sandler's Bobby Boucher failed to wring yuks or pathos from my heart as I bitterly munched on my Sno Caps. The weird renegade punch of his previous works was absent from this limp tale of an unexpected sporting phenom. The Waterboy was just Adam Sandler talking silly for 90 minutes. It was a stain on his career, and I felt relief that taco-related obligations kept me out of the fray.

Inexplicably, The Waterboy proved just as financially successful as The Wedding Singer, which seemed to set precedent for Adam Sandler. He's basically been remaking both of these movies every other year since. Oh sure, he occasionally surprises us with an anomaly like Punch-Drunk Love or Funny People, but when those risks fail to yield monetary windfalls Sandler retreats to what is most comfortable: goofy voices (Little Nicky, You Don't Mess With The Zohan) or brainless rom-com (50 First Dates, Just Go With It).

The Waterboy ended my love affair with Sandler, and today I consider the film's only positive aspect to be the fact it helped fund a refurbishing of Spec Martin Stadium. The home of the DeLand High Bulldogs is now a very stately and professional-looking complex, one in which I'm sure the players and the community take pride. You'd certainly never know it was originally constructed in 1941. Spec Martin, by the way, was the DeLand Bulldogs coach who lead the team to EFC victory in 1947.

It's hard to get a good look at the actual field in Spec Martin just strolling by on Euclid Avenue, but maybe that's as it should be. You can't see much of Yankee Stadium's interior splendor from the 6 train. The glimpses of Spec Martin you can get still impress, even if it is the house Bobby Boucher built.