Pay to belay: Could creative bribery make Nugent go away?

The author paid good allowance money for this. Sorry, Dad!

As a teen, I was down with the whole Nugent schtick. The ridiculously proficient guitar playing. The goggle-eyed mania. The gift for saying the absolute worst thing in front of the largest number of people. Like Alice Cooper and David Lee Roth, Nugent seemed to understand that the best hard-rock records have always been comedy albums; I can vividly recall attending a party at which the hosts were playing only the between-song raps on his Double Live Gonzo, not the actual music.

I stayed on the Nugent train longer than most people, only hopping off after 1983’s Penetrator. As a result, I think I might be more conversant with his oeuvre than any other liberal blogger alive. Last month, when 1450 Media’s Larry Womack got up in arms over Nugent’s 1981 track “Jailbait” (Wait a minute, officer/ Don’t put those cuffs on me/ Put ‘em on her, and I’ll share her with ya), my main reaction was one of deep satisfaction that, at long last, somebody else had finally listened to Intensities in 10 Cities.

By the mid-’80s, after even I had lost interest, Nugent realized he needed to supplement his income somehow. So he launched a second career as a right-wing pundit. Now, if a guy who would dedicate a song called “Wang Dang Sweet Poontang" to “all that Nashville pussy” has politics, no sane person wants to know what they are. But what else was Ted to do? He had illegitimate kids to feed. And for a while, he managed to retain some degree of wit about it. His 2001 book, God, Guns, & Rock ’N’ Roll, contains the absolute best chapter title I’ve ever come across: “Wanna Go to a Gun and Knife Show? I’ll Open My Jacket.” How I wish anybody on the left could be that funny. (The closest runner-up is Al Franken, whose Lies and the Lying Liars Who Tell Them has successive chapters titled “Ann Coulter: Nutcase” and “You Know Who I Don’t Like? Ann Coulter.”)

The trouble is that, these days, Nugent has mostly abandoned the humor angle. He’s become just another redneck boor who spews hate speech without even trying to be creative about it. He throws around slurs with such lazy abandon that the rest of society doesn’t always realize just how noxious those slurs are. It was some sort of watershed when, also last month, Nugent was forced to utter a half-hearted apology for calling the President a “subhuman mongrel,” but all of the media coverage I saw focused on the inadvisability of so insulting one’s Commander-in-Chief – not the fact that the Motor City Madman had essentially declared that all Americans of mixed race are lower than him on the evolutionary scale.

So I was intrigued to learn this week that, per the Huffington Post, a Texas town had paid Uncle Ted $16,000 not to perform. On its face, that sounded like a promising reversal of the music industry’s odious “pay to play” tactic, in which unscrupulous club owners charge up-and-coming acts for access to the “platform” they provide. Could a right-thinking community – or even a consortium of deep-pocketed, socially conscious individuals -- simply buy off a Nugent, guaranteeing him a nice payday for keeping his toxic nonsense out of the city limits?

Sadly, HuffPo, as is its wont, had mischaracterized the story somewhat. The city of Longview, TX had simply rescinded its invitation to have Nugent play its Fourth of July Festival; as a result, they had been contractually bound to pay him half of his $32,000 performance fee. That’s a nice message to send, but it’s still a far cry from what I had been envisioning: some town that had never even considered the idea of hosting a Nugent concert offering him a nice chunk of change to stay the hell away. Maybe for life.

So it didn’t quite pan out that way. But could it? Could “pay to belay” actually become a thing? In the case of Nugent the touring musician, it probably wouldn’t amount to much: The audience he reaches as a media talking head and NRA spokesman dwarfs that which he can still command on the road. He’s on CNN as often as he is precisely because his performing career has long been state-fair material. And have you heard what gets said at state fairs? It makes “subhuman mongrel” sound like the Indian Love Call. 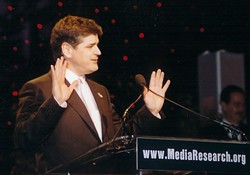 "Let me get this straight: You WON'T pay me to NOT do my show? Oh, how my head does hurt."

But what if some progressive organization dangled some sweet coin in front of Nugent under the condition that he just stay off the airwaves altogether? What if they promised to better any offer Clear Channel or the NRA could throw at him? “Ted Nugent, paid spokesman for nothing in particular, thanks.” What if they made the same offer to Coulter? Or Limbaugh? Or Michael Savage? It’s no coincidence that the most loudly antisocial voices are usually the ones preaching the doctrine of the free market. Wouldn’t it be fun to see them forced to choose between their need for attention and their actual, endlessly stated principles? Especially when said principles coincide neatly with their bottom line?

Sure, there’s a purity counterargument to be made. It could be said that, by filling the coffers of a bigot, you’re just enabling him. But here’s the thing: Somebody like Nugent is going to think what he thinks, no matter what. Reasoned debate is not going to elevate him above the level of the Neanderthal. Paying him to zip it might send him the wrong message, but so what? It prevents his message from reaching the ears of the impressionable, and that’s all we should really care about. That, and the degree to which having his garbage disseminated on all channels emboldens the rest of the Neanderthals. One nice deposit into PayPal, and all that damage could go away.

Unfortunately, the hatemongers are probably too smart for it. (Yes, even Hannity.) The minute the first good offer came in, they’d probably blast out a mass email crying, “The left is trying to buy my silence! Donate right now, to keep the chimes of freedom ringing in the ears of the communist sympathizers!” And they’d likely be able to raise more in small donations than our side would be offering as a lump-sum payment. (After all, their supporters have all that discretionary income they’ve been refusing to surrender to the IRS.)

Still, it’s fun to fantasize about playing Pied, Paying Piper to the rats of the right – or, failing that, just hiring them out as pitchmen for our own issues, like some starry-eyed serviceman getting Casey Kasem to make a long-distance dedication to decency.

This is a love song! I wanna dedicate this to all that San Fran wee-wee! This is a little love song called “Wang Dang Sweet Black Thang!”

Shoot, I’d even think about buying that record. As long as the guitar solos were good.

Days without a response from the publication that plagiarized from me and won’t come clean: 275.