Location Matters is a series that reflects upon pieces of Orlando Central Florida immortalized in popular film.

Edward Scissorhands: a delightful mix of quirk and melancholy, a movie that could probably be tagged as Tim Burton's best directorial effort without starting a bar fight or riot. And how close it came to disaster, in the sense that 20th Century Fox was convinced Tom Cruise was the right actor for the title role. Thankfully, the studio deferred to Burton's casting decisions, but not before they forced him to meet with Cruise. "A lot of questions came up," the director later said about this conference. You have to imagine one of the first was "I know Edward Scissorhands is a fragile oddity who knows nothing of the outside world, but can't there be a scene where he rides a motorcycle in sunglasses to some bitchin' metal tune?"

The pastel suburb Edward is drawn into looks like it could be Anywhere, USA, but Tim Burton and company filmed their 1990 classic in Lakeland, the jewel between Tampa and Orlando, best known as the birthplace of the Publix supermarket chain. The homes featured in the movie reverted to normal colors years ago (the animal-shaped bushes have all grown out as well) but one locale hasn't changed since Edward came to town: South Florida Avenue's Southgate Shopping Center, whose enormous parabolic arch proved crucial in giving the movie some of its retro '50s charm.

Publix founder George Jenkins opened Southgate in November 1957 under the assumption that a grocery store that anchored its own retail plaza would do far better business than a store that sat alone. It sounds crazy, but at that time strip malls were still a pretty newfangled thing and not everyone was sure they were the wave of the future. The hunch Jenkins had was, of course, correct. Today our country is almost nothing but shopping plazas featuring one enormous attraction orbited by several smaller businesses. Publix is still holding strong at Southgate, as are the Crowder Brothers Ace Hardware, the Mt. Fuji Japanese Steakhouse and the Five Guys that now sits in the parking lot apart from the actual shopping strip. 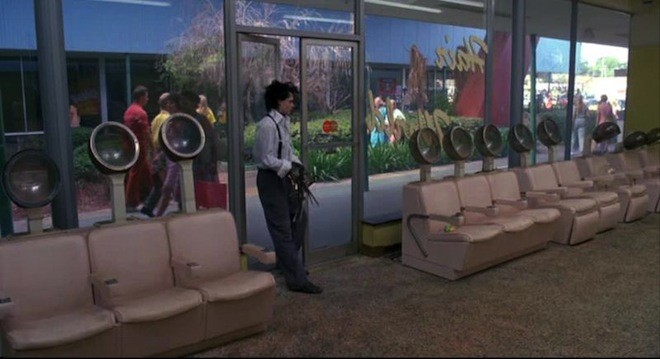 Scissorhands exits his salon. Part of Southgate's arch is in the background.

Interestingly enough, the only vacant cluster of Southgate is the area directly behind the 67-ton arch, which is where Tim Burton positioned his salon in Edward Scissorhands (our titular weirdo finds acclaim at the salon, of course, for his nimble haircutting skills). Most recently this shop was a liquor store, but apparently the flow of booze-happy Burton fans wasn't strong enough to keep doors open. Maybe if Paul Mitchell opened a hairdressing school in this space it could survive. That might be cutesy and meta enough to endure.

In an age where we can't seem to stop razing history in favor of modern monstrosities, it's comforting to stumble upon a place like Southgate and see it's being wonderfully preserved. No startling signs of deterioration, no shadows of our 21st Century Wal-Mart reality. Southgate and the rest of central Lakeland retain the charm of either an era bygone or some beautiful alternate universe where Tom Cruise could never even consider crossing borders into Tim Burton's world.