April 01, 2014 at 4:20 PM
comment
I suffer from two huge fictional disorders: advanced foodie-ism and level 5 movie addiction. I don't go to fictional support groups or anything, though. That would just be silly. However, these two disorders combine to make a raging beast: fictional restaurant envy. In fact, I think it's a mortal fictional sin or something. To help explain this sickness a little better, here are some of the fictional restaurants I wish really existed: 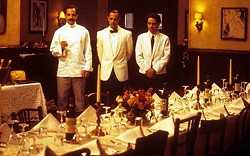 1. Big Night is my favorite food movie of all time, so it makes sense that 'Paradise' is the fictional restaurant at which I'd most want to eat. The big Louis Prima feast nonwithstanding, I'd love to just be able to stroll into lunch and get a nice bowl of risotto lovingly prepared by Primo. He wouldn't need to remind me that "Sometimes the spaghetti likes to be alone." I know, Primo, I know. However, if he wanted hook me up with a slice timpano, I wouldn't turn it down.

2. I literally have to bite my tongue every time I order falafel to keep myself from saying, "Can I have a falafel with hot sauce, a side order of Baba Ghanoush and a seltzer, please?" So, I'd like to visit Mustafa's Falafel stand from Party Girl,  so that I can do so in a judgment-free zone. I don't think I ever have hope of dressing quite as cute as Parkey Posey, though.

3. It's, like, impossible to get into Dorsia. Well, in 1980s of American Psycho it was. Regardless, if Patrick Bateman holds it such high regard, it's bound to be top notch, right? Apparently, I'm not the only one who feels this way, as there have been numerous iterations of Dorsia restaurants that have popped since the release of the movie. The Dorisa in NYC seems the most legit, though. I wonder how hard it is to get a table?

4. Okay, so this is a real, actual place, but if I went to the Grand Central Oyster Bar today, there's no way I'd get quite the same experience as if I went in the heydey of Roger and Don of Mad Men. Sure, I could go and spend a day drinking martinis and eating oysters, but the ambiance just wouldn't be the same. Hmm, maybe I actually need Roger and Don to make this experience complete.

5. I'm gonna be honest here, I didn't even know that pit beef existed until I saw Pecker. Of course, I looked it up and now, I must have it. Basically, it's just what it sounds like: beef cooked over a flame-filled open pit. After cooking, the beef is piled up on some white bread and covered with whatever fixings you'd like. So, someone make Memama's Pit Beef stand from Pecker for reaslies, please. Or at least find me some pit beef in Orlando.

6. Now, just because I want to eat at Der Waffle Haus does not mean I'd enjoy being dead and taking people's souls for a living. However, this seems like such a blue collar, hearty place to get your grub on. I'd insist that Tiffany be my waitress and wonder at the random Post-its left behind by Rube and his crew. Oh, Dead Like Me you were taken from us too young. Just like George, you never got to reach your full potential.