Graffiti-lando: Can we make it work?

Earlier this month we shared a 14-slide photo gallery highlighting some graffiti in the Mills 50 Main Street District. It’s an area that has had plenty of tagging activity - what some would call vandalism - over the years.  Property owners were of course incensed at the damage to private property and the conversation online quickly turned heated. Some pro-graffiti advocates lashed out at the Weekly (and at me, specifically) for writing something that they felt called them out. It was a surprisingly divisive posting, and I was caught off guard by the strong feelings it elicited in so many people. It got me thinking. Anthropologically speaking, graffiti has been around since someone smushed their paint-splattered their hand onto a cave wall. There’s something in the lizard part of our brains that drives us to leave a mark on places we’ve been or places we live. Writing your name on your elementary school desk during math class, carving your initials into a tree or even taking a Krink marker and scrawling your tag onto an electric box. People like to leave their mark. Graffiti happens. I started my artist journey by picking up a can of spray-paint with some friends and writing my name on a freight train back in Canada. Was it a masterpiece of modern art? Hell no, but it gave me the confidence I needed to start showing my art to people – and maybe even charge them for it. The change came when I realized that painting on private property was hurting people. So I stopped. Now I just put chairs at bus stops and call it a day. The most seductive part of graffiti is the lack of barriers for artists to show their work, for free, to large numbers of people. The prevalent feeling is that if you bomb enough buildings and get good enough at your craft, you can make a name for yourself and even pay some bills. It’s almost like you’re carving out a place in your community with a spray can. As someone said when they posted on our Facebook wall, “It all starts with a tag. Tags lead to throw-ups, and throw-ups lead to murals.” People like Shepard Fairey have even managed to attain some celebrity from their work. Art is a way for people to express themselves. We get that, but I believe graffiti is an expression of repression. People resort to illegal means of expression because they believe the legal forms don't, or won't, include them. If you don’t have a portfolio, you can’t get into any good galleries. If you want to sell at a group show, you have to give a hefty percentage of your sale to the gallery owner. But for a lot of people, graffiti seems a little bit more authentic and real than the art that gets put in frames and sold indoors. It’s very bootstrap-American in the sense that you start from nothing, work hard and build yourself up. The problem comes when it harms other people and destroys property. Nobody’s going to be won over by your work if they’re getting fined by the city for not painting over your piece fast enough. The city isn’t going to be on your side if they’re getting complaints from tax-paying business owners because you wrote your name in purple on their shop door. So, what now? Some advocate tougher measures against tagging. More police keeping an eye out for taggers, tougher sentences or – as was suggested on the Facebook thread – calls for violence. Other people suggest legitimizing the practice by providing a series of “permission walls” where artists can hone their skills. Places like 5Pointz in Queens, or Hosier Lane in Melbourne, Australia provide areas that are free to the public and full of graffiti. People who want to put their work up usually have to go through a curator or central contact and abide by certain rules – like no profanity, or nudity – but it seems like a really democratic process. Murals are allocated a certain amount of space and exhibition time based on the quality and durability of the work, then eventually painted over to free space for new pieces. It may not be as thrilling as climbing onto a rooftop at 3 a.m., but it gives people more time to do more detailed work – work that hopefully means less tagging of local businesses. If you don’t believe me, check out the ever-changing series on the wall of Pho 88. Permission walls trigger mixed reactions though. Some officials argue they can ease vandalism by giving the painters a place for their creativity while others say the spray-paint murals lead to one-upmanship and nuisance graffiti nearby. When approached - angrily - by a local graffiti artist, I was accused of being part of the problem by slandering them with the aforementioned photo gallery. So rather than point fingers, I tried to listen. The result is the first in hopefully a series of permission walls being set up around town in cooperation with local Main Street districts like Mills 50 and Ivanhoe Village. Thanks to the help of Joanne Grant, executive director of Mills 50 the first wall is now located at Pho Hoa on Colonial Drive, which was a recent victim of some graffiti vandalism. The shop owners have opened their arms to local taggers to come work with them on beautifying their business during the day, rather than defacing it under the cover of night. Check out the photos below 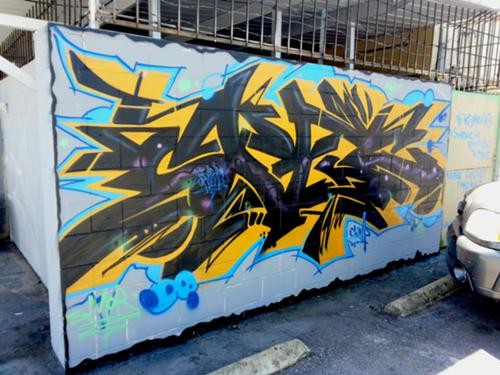 So, what do you think? Will these walls help? Can graffiti, which at its core an illicit act, be something we can embrace and work for the benefit of community?