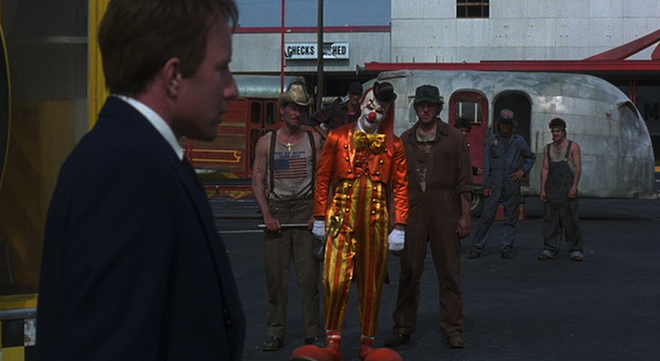 Howard and Quaid square off in Sanford. Yes, that's Jim Varney in the suspenders.

In the early '90s American cinema went through a "bad clown" phase. There was Bill Murray's bank-robbing harlequin in Quick Change, Bobcat Goldthwait's self-destructive Shakes the Clown, and Tim Curry as sewer-dwelling Bozo mutation Pennywise in It (yes, It was made-for-TV, but It counts because It scarred a generation). Oft neglected in discussions about floppy-shoed evil doers is Dennis Quaid's Biff, the smarmy and scheming pyrokinetic clown from 1993's Wilder Napalm. Admittedly, Biff's only coming up here because Wilder Napalm was shot in and around Orlando, but that is no reflection on Quaid's performance. Randy's brother is great as Napalm's grease-painted antagonist. In fact, the whole movie is great. Perhaps by '93 audiences were completely clowned out, and that's why this classic (written by Vince Gilligan) was banished from our collective pop culture mind.

The central action in Wilder Napalm occurs at the Midlovian Shopping Center, where Wilder Foudroyant (Arliss Howard) mans a photo booth all day. Life is peachy until Wilder's brother Wallace (Quaid) shows up, his employing carnival in tow, convinced he can win back Wilder's wife Vida (Debra Winger), with whom he used to get freaky. Complicating matters is the fact that both brothers can create/control fire with their minds. Indeed, they are wicked fire-starters, twisted instigators. Wallace is more of an instigator than Wilder, however, possessing a brash devil-may-care attitude more potent than Wilder's reserved nature. This is why Vida entertains going back to Wallace, despite the fact his Biff is but a lowly disgusting carnival clown, not even good enough for the god-dang circus. We all know the hierarchy is photo mat operator > private party clown > circus clown > vice president > carnival clown.

The Midlovian Shopping Center existed long before Wilder Napalm; now the Sanford Plaza, this strip mall at 2921 S. Orlando Drive was originally constructed in 1965 and has hosted a slew of business over the years. Some of these businesses are key players in the unreleased film that is my personal life: a movie theater once sat in the strip, which is where my grandparents took me to see Peter Pan, Return of the Jedi, and the animated Masters of the Universe movie; in the late '90s, music venue Tsunami Beach Club occupied the movie theater's old spot, where I saw Nerf Herder, the Bloodhound Gang, and the entirety of Warped Tour '97 (which occurred mostly in the parking lot and was basically like Wilder Napalm with less psychic fires and more NOFX); sometime during college I became friendly with one of the clerks at the movie rental shop Video News, and he traded me two VHS tapes of vintage "Gong Show" episodes for a few Samhain records (not sure who came out ahead in that deal).

These are memories you just can't flush. I'm sure longtime Sanford denizens have ample plaza history of their own. How many hearts were broken when the strip was refurbished in '08, erasing the familiar white with red trim motif that director Glenn Gordon Caron thankfully captured in his Jim Varney co-starring masterpiece?

Going back to the systematic repression of Wilder Napalm, that could all be traced back to those dastardly fiends Siskel and Ebert, both of whom panned the film during initial release on their syndicated television show At the Movies. While the men praise Debra Winger in their review for being "exciting" (Siskel) and "sensuous" (Ebert), neither can approve Napalm as a thumbs up affair. "I'm afraid the whole thing is just an exercise in style," Ebert tells the camera in a disappointed tone; Siskel quickly agrees. Well, geez, fellas, I didn't realize we were turning to the fire-starting clown movie for emotional resonance. What should a fire-starting clown movie be if not stylish?

Perhaps it's better this way. If Wilder Napalm were as lauded and loved as Harry Potter, our Sanford Plaza would be congested and overrun with all manner of Quaid-iacs, causing irreparable damage to the facade whilst trying to recreate their favorite Foudroyant brother moments. They don't get a moment's rest at that Manhattan firehouse where Ivan Reitman filmed Ghostbusters, and those guys are actual firemen. Can you imagine the war zone that Bravo supermarket would be if Napalm had smashed box office records? Why, nary a pear would be unblemished!

So here's to mixed blessings, I guess.