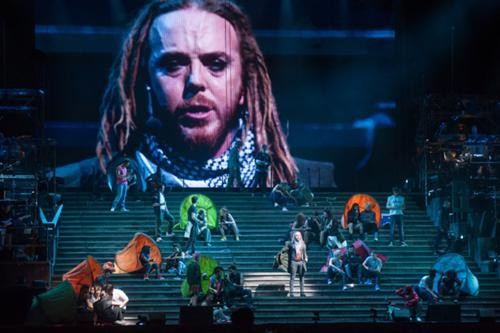 As last month's first-class touring production of Evita proved, there's still plenty of life left in Andrew Lloyd Webber's early musicals, and a new area tour is aiming to bring one of his first hits to an entirely new audience. As of 10 a.m. on April 7, tickets are now on sale for Jesus Christ Superstar at the Amway Center, which arrives on June 14, 2014, for a one-night only show with a truly unbelivable cast.

When the following casting announcement first crossed my desk, I thought it might be a mistimed April Fools prank, but this lineup is for real. Brace yourselves:

The tour was put together by the producers of Rock of Ages and Fuerza Bruta, and received positive reviews in the UK and Australia. With a cast like this, I know that this is one production I need to see first-hand.

ORLANDO, FLORIDA [April 4, 2014] – “Jesus Christ Superstar,” the global phenomenon that has wowed audiences for over 40 years, is reimagined for the 21st century as an arena-rock spectacular. The biggest ever North American arena tour of Tim Rice and Andrew Lloyd Webber’s groundbreaking rock musical is coming to Orlando at the Amway Center on Saturday, June 14 with an extraordinary cast of rock, pop and R&B superstars.

Tickets go on sale Friday, April 11 at 10 a.m. through Ticketmaster.com, by calling 800.745.3000 and at the Amway Center box office. American Express® Card Members can purchase tickets before the general public beginning Friday, April 4 at 10 a.m. Tickets range from $34.50 to $149.50 with a limited number of Gold Circle seats and VIP Experience packages available. Additional ticket fees may apply.

Brandon Boyd, Grammy® nominated lead vocalist of rock band Incubus, is confirmed for the role of ‘Judas Iscariot’, Grammy® nominated *NSYNC vocalist, JC Chasez, will play ‘Pontius Pilate’, Grammy® Award winner and member of Destiny’s Child, Michelle Williams, will take the female lead as ‘Mary Magdalene’, English singer-songwriter and lead singer in Public Image Ltd. (PiL) and Sex Pistols, John Rotten Lydon, will play ‘King Herod’ and introducing British actor and singer, Ben Forster, who won England’s “ITV Superstar” competition in 2012 and played the lead role in the UK and Australian arena tours of “Jesus Christ Superstar,” will revive his role as ‘Jesus.’ With over 50 cast and musicians on stage this is one arena show that can’t be missed!

The North American leg comes on the heels of the wildly successful UK and Australian arena tours, which began in the UK in September 2012 and commenced in Australia in May 2013. The Times said, “The show gets the right balance between the spectacular, the jokey and the sincere. The performances from the well-choreographed supporting cast are fine throughout. Honestly, it’s enough to give rock opera a good name.” The Evening Chronicle exclaimed, “the extravagance of the production, a flamboyant spectacle of acrobatics, dramatic flames and provocative pole dancing,” and Liverpool Daily Post claimed, “Restored to its rock roots, the star-studded second coming of Jesus Christ Superstar is big, brash and bold ” and the Manchester Evening News stated, “from the very opening strains the pounding music, the huge and sophisticated video backdrops and pulsating energy from a talented ensemble cast make this a true spectacle.”

“In 1971 Andrew and I were thrilled by the first-ever Jesus Christ Superstar tour of the United States,” said Tim Rice. “We certainly did not imagine then that 43 years later we would be witnessing another America-wide tour of our first big hit show. We are delighted and grateful that enthusiasm for Superstar has been maintained over the years and this new production presents the work in its most powerful format - as a true rock experience.”

“Jesus Christ Superstar began life as a rock album...probably because nobody believed back in 1969 that you could present a stage musical about the last days of the life of Jesus Christ. I shall never forget its first live performance in the Civic Arena, Pittsburgh on July 12th 1971. Of course JCS subsequently became a legit theatre stalwart, but I, personally, have always hankered after seeing it again in the arenas where it started," said Andrew Lloyd Webber.

“I’m excited to be involved with Jesus Christ Superstar,” said Michael Cohl. “The show has evolved greatly over the past 40 years and it is exhilarating to be a part of a project that marries this incredible property and its extraordinary music with the new, innovative technology that has become available for live shows. This arena rock spectacular is a whole new experience for fans.”

"I am so thrilled to be a part of this amazing production!” said Brandon Boyd. “I grew up on Andrew Lloyd Webber's classics and never imagined I would be playing a role in one, let alone with such an incredibly diverse cast of players. Truly an honor!"

"When I heard Jesus Christ Superstar was coming to the States, I was excited at the idea to be a part of telling one of the most influential stories in history through the scope of such a talented composer, Andrew Lloyd Webber,” said JC Chasez. “I’m excited to work with such a dynamic cast, and to bring Jesus Christ Superstar back to its roots as a rock arena experience."

“I am so excited to be part of such a legendary production alongside an amazing cast!, said Michelle Williams. “I am truly looking forward to this experience!”

“I'm here to sing with the King of the Jews, who could ask for anything more?” said John Rotten Lydon.

“I feel so excited to bring this production to North America,” said Ben Forster. “America has to experience this rock arena spectacular as Andrew Lloyd Webber envisaged it. I am the real life Billy Elliot, from a coal mining city in the north of England to touring huge arenas across North America! You are about to witness my dream come true!”

TICKETS: $34.50 to $149.50. Buy tickets at amwaycenter.com, Chase Box Office at Amway Center, Ticketmaster retail locations, charge-by-phone at 800.745.3000 or at Ticketmaster.com. All dates, act(s) and ticket prices are subject to change without notice. All tickets are subject to applicable taxes, service, handling and facility fee charges. For Amway Center box office and ticket information, visit amwaycenter.com (phone purchases are not available through the Amway Center box office). The Amway Center is located at 400 West Church Street and the box office is located on the north side of the Amway Center, near the intersection of Church Street and Hughey Avenue.