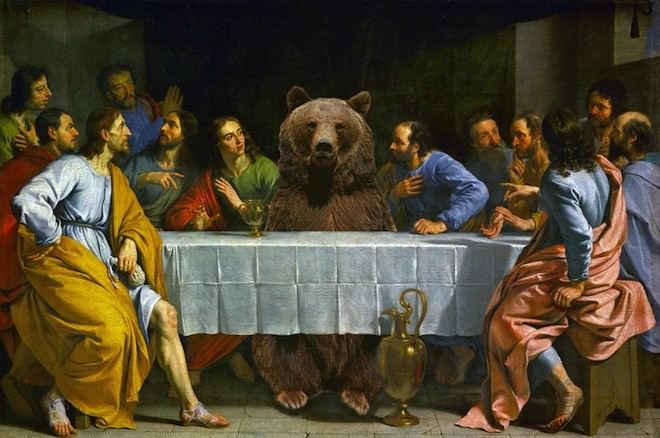 Actual painting from the Renaissance.

Last night at approximately 7:45 p.m. Terri Frana was sitting on her back porch in Lake Mary when she spotted a couple of bears traipsing about the area. Concerned for her two children who had just biked to a neighbor's house, Frana ventured to her garage to check the scene. There she discovered five bears rooting through her garbage. Before she had time to react a bear raised up and attacked her.

"[The bear] started pulling me toward the woods," Frana later told WESH-Channel 2. "I just thought, 'God, please, this can't be the end. It can't end like this. ' I literally heard Jesus say to me, 'It's O.K., you will be at peace with us.'"

Moments later, the agitated bear released Terri from her death grip, allowing the wife and mother to escape. Terri is home from the hospital today, 30 staples and 10 stitches richer in her head. Florida Fish & Wildlife officials shot an aggressive bear they encountered Sunday night but are not yet sure if it's the actual bear that attacked Frana (three other bears were captured and put down, perhaps to send some kind of message to the bear community; again, it is unknown if any of these ursine were involved in the Frana garbage incident).

So the takeaway here is if a bear attacks you, just give in, because that's literally what Jesus would do? This is confusing to say the least. Is this the kingdom of man or the kingdom of bear? What's the Vatican's stance on bear attacks? Does the Pope agree with giving thine self over to furry garbage thieves?

I swear, if the Pope turns out to be one of these people leaving dog food and strawberries out for the bears I will just scream.