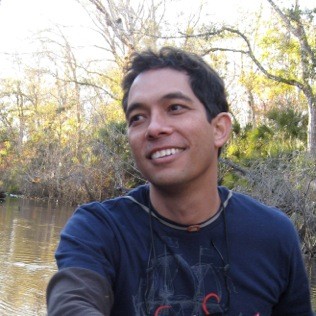 Freelance writer, video specialist and theater maker Tony Bolante (onomatopoeia, on the nOse) claims native Orlando status, save one stint "out of state" a decade ago. Tony refused to provide further detail about his time beyond our borders, so we interpret that to mean he's mastered the art of time travel. His most recent play Liquid Courage debuts next month at the Fringe Festival.

1. Who's your favorite Orlando resident, living, dead, real, or fictional?

Jack Kerouac "went to bed obscure and woke up famous" right here in Orlando. I like that idea. But Orlando can feel a little more Ralph Kazarian than Jack Kerouac. It's the difference between feeling "on the road" and being nearly un-insurable.

The Nutcracker by Orlando Ballet. Yes, that's a concert, and that's my answer.

Not since I was a kid.

Playalinda. It's natural, and at the end of the Barrier Island, au naturel.

The Plaza Theatre, a.k.a. the Rocking Chair. Today, it's the Plaza Live, but it was once a cinema with soft seats that literally rocked.

Its distance from every other great city.

The weather nine months out of the year.

I-75 is a better drive, but you know it doesn't go through Orlando, right? So, if all interstate highways are on the table, I vote for I-95. It's a better escape route.

Downtown Credo in College Park. Their space, people and product are enough to make them my favorite. But their authentic commitment and connection to the community seals the deal. I should also say I've more recently become a fan of Cafe Divina in Ivanhoe Village, a little closer to home.

12. Do you have an alcoholic beverage of choice? If so, what?

Vodka is my go-to spirit. I was recently on a Moscow Mule kick, so to speak. But if it ain't in a copper cup, comrade, it ain't a mule.

13. What do you think of Wesley Snipes?

I don't think of Wesley Snipes. Next question.

Pro. Hating the chickens would be like hating Punxsutawney Phil. In Strip Mall America, local color is hard to come by. Keep the chickens.

15. Universal Studios or Islands of Adventure?

Islands of Adventure. The Dudley Do-Right flume ride squirts water on you just for the hell of it, which is funny to me.

16. How much is too much to spend for a vintage Shaq Magic jersey?

Any amount is too much. We wear different shirt sizes. Also, I don't care.

Huh? Orange Blossom Trail is a LONG road, spanning from Kissimmee to Ocala ... but I'm guessing you're interested in the stretch of South OBT notorious as a red light district. Sorry, I can't indulge your prurience. If you're looking for a good time on South OBT, go to Woodlands Indian restaurant. It's excellent.

18. If you could give Orlando a new motto or nickname, what would it be?

"When you're here, you're family." Same as Olive Garden. Or maybe, "It'll grow on you." Or, "The little city with a big city theme."

Is this like the old "you know you're a redneck if

" schtick? What makes someone an Orlandoan? A sense of history that doesn't extend before the most recent theme park ride? A love-hate relationship with the Walt Disney Company? ... for better and for worse, what makes you an Orlandoan is nothing but your zip code. Our population is diverse, but not exactly cosmopolitan. It's fast-growing, but with high turnover. There seems to be at least as many naturalized as native residents. And sprawl conspires against community. So it's gonna take more than 19 questions to discover a common sense of identity. But it's a start.