Gov. Rick Scott does a Facebook Q&A, speaks only in campaign soundbites

April 18, 2014 at 3:48 PM
comment
Yesterday, Gov. Rick Scott announced that he'd be partaking in a Very Special Facebook Q&A with his constituents – starting at 6 p.m. on April 17, his campaign announced, he'd be taking questions live via Facebook from some empty-looking room in Jacksonville. 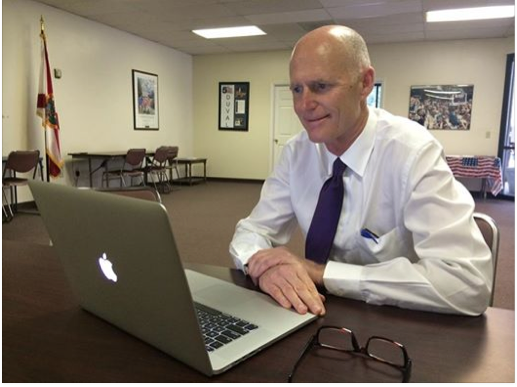 I don't always take questions on the Internet. But when I do, I talk in soundbites and make sure to give you as little information as possible.

Well, 6 p.m. rolled around and so did the questions. The first one was pretty predictable – a dig at Obamacare – and Scott quickly responded with less of an answer and more of a chance to throw presumed Democratic gubernatorial opponent Charlie Crist under the bus.

In fact, pretty much everything he responded to was either a political soundbite or a stab at his political opponents and their positions. But Scott's inquiring audience, it seems, wasn't very satisfied with his dodging and pandering. After a little while, people started challenging Scott on harder issues, like transportation funding, tuition hikes, VA hospitals and common-core education standards in education – lots of questions about common core. When things started to get a little heated in the comments, a few cheerleaders piped up to tell the governor what a super-duper job he's been doing for the state, or to throw him a softball question seemingly designed to let him get to his talking points:

But even the rah-rahing of a few Rick Scott enthusiasts couldn't keep the critics at bay. A chorus of frustrated citizens chimed in with off-the-script questions that required more than one-liners and zingers about Democrats, the federal government or Charlie Crist:

And they were met with ... silence. After answering less than 20 questions (and some of them weren't even questions – just pats on the back from supporters) Scott simply stopped responding. He didn't sign off, he didn't address any of the repeated challenges about common core or Medicaid expansion or funding for higher education or the environment. He just quietly disappeared. Then, about an hour after the Q&A began, a new message popped up on his Facebook wall, thanking people for playing along.  Note the first comment posted in response.

He even promises to do it again sometime. Why not? It's not like he has to answer the hard questions or anything.