April 22, 2014 at 5:31 PM
comment
NASA is holding a #GlobalSelfie drive today, in which it's inviting people from around the world to take selfies wherever they are today and upload them to social media with the tag #GlobalSelfie. NASA will combine all the pics and turn them into a mosaic and video that it will release sometime in May. "On this Earth Day, we wanted to create a different picture of our planet -- a crowd-sourced collection of snapshots of the people of Earth that we could use to create one unique mosaic of the Blue Marble," NASA says in its explanation of the project. You can upload your selfie to Facebook, Twitter, Instagram, Google+ or Flickr to be part of the project. Here are some of the selfies posted to the project's Facebook page so far: 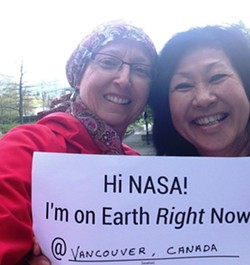 https://www.facebook.com/events/233952006809533/   Erin, LEGOLAND ® Florida is excited to kick off a goundbreaking partnership with Tampa Electric on Tuesday, with all 150-acres of the theme park running completely on renewable energy for the day in celebration of Earth Day. LEGOLAND Florida is the first theme park in the United States to run entirely on renewable energy for one full day. Please see below for photos and b-roll. Photos: http://bit.ly/1eWrAJb (password: legoland11) Broll: http://bit.ly/1lwFch6

WINTER HAVEN, Fla. (April 22, 2014)– Today, LEGOLAND ® Florida and Tampa Electric will kick off a groundbreaking partnership by making the 150-acre theme park run completely on renewable energy for the day in celebration of Earth Day – the first theme park to do so in the United States. The celebration is part of existing and new conservation initiatives, including installations that will educate park guests about solar energy. As part of the partnership, LEGOLAND Florida will also permanently power a section of the park, Imagination Zone, on renewable energy. “This is a historic day for LEGOLAND Florida,” said LEGOLAND Florida General Manager Adrian Jones. “With our new partnership with Tampa Electric, we will give guests a whole new way to learn about renewable energy while also doing something that no other theme park in the U.S. has done before.” A celebratory moment will be held just prior to park opening Tuesday, at approximately 9:45 a.m., with both Jones and Bruce Narzissenfeld, vice president of Marketing, Customer Service, Business Development and Fuel Operations for Tampa Electric, proclaiming the partnership and special green initiative. The focal point centered around LEGOLAND Florida running on renewable energy for an entire day, with environmental savings equal to removing three cars from the road for one year or planting six acres of trees. The partnership also resulted in the installation of a 30-kilowatt solar panel array mounted atop the Imagination Zone attraction venue. Funded by Tampa Electric, the system supports Tampa Electric's Renewable Energy program that lets the company's customers purchase a portion of their electricity from renewable sources. “This is a partnership built on doing the right thing for the environment,” said Narzissenfeld. “Together, we’ll teach the next generation about the benefits of investing in renewable fuels like the sun to produce electricity. As part of the partnership, a new display will be placed inside the park starting in June, featuring an interactive 6-foot LEGO ® Earth model that educates guests on solar technologies. Located outside Imagination Zone, visitors will be able to affect the rate of LEGO Earth’s rotation with tactile solar panels. Guests will also enjoy an interactive zone that features LEGO mini model communities running on renewable energy inside the Imagination Zone. The new areas add to the multiple educational aspects already within LEGOLAND Florida. The park gives kids a chance to learn and play with STEM-based activities such as LEGO MINDSTORMS robots, Build & Test and Power Towers. LEGOLAND Florida has made a consistent effort for conservation since the park opened in 2011, including: LEGOLAND ® Florida: LEGOLAND® Florida is a 150-acre interactive theme park with more than 50 rides, shows and attractions, a Water Park and The LEGO® World of Chima presented by Cartoon Network all geared to families with children ages 2 to 12. Recently announced, The LEGOLAND Hotel will open in 2015 featuring 152 highly themed rooms and suites, LEGO décor, interactive play areas, a pool and a restaurant. There are currently five other LEGOLAND Parks in the world – LEGOLAND California in Carlsbad, LEGOLAND Billund in Denmark, LEGOLAND Deutschland near Günzburg, Germany and LEGOLAND Windsor outside of London and just opened LEGOLAND Malaysia —the sixth LEGOLAND Park and first in Asia. The LEGOLAND theme parks are a part of Merlin Entertainments Group, the second largest attractions operator in the world. For the most current information, log on to www.LEGOLAND.com. About Tampa Electric: Tampa Electric, one of Florida’s largest investor-owned electric utilities, is part of the TECO Energy family of companies. Tampa Electric serves almost 700,000 customers in West Central Florida. TECO Energy Inc. (NYSE: TE) is an energy-related holding company with regulated electric and gas utility operations in Florida through Tampa Electric and Peoples Gas System. TECO Energy’s other major subsidiary, TECO Coal, owns and operates coal-production facilities in Kentucky, Tennessee and Virginia. About Merlin Entertainments: