Star and co-writer Heather Wahlquist talks about her latest film

Heather Wahlquist is far from yellow. Indeed, after her throw-everything-at-the-screen performance in the recent Nick Cassavetes film, which she co-wrote, it’s obvious she’s anything but scared. Still, if you’re talking about the script for Yellow (4 stars on OW’s 1-5 scale) and not the fearful adjective, she has a surprising amount in common with her cinematic concoction. (I spoke with Wahlquist at the 2014 Florida Film Festival, when she attended a screening of the film.)

“It was coming out of a really, like, accidental time in my life, where you wake up one day, 12 years have [gone] by, and

I decided that it was better to have fun than anything else,” she says. “And so I went on this crazy spree of whatever and in the process had a kid. [The film is] partially auto-biographical, I’d have to say.”

Though that “spree” helped inspire Yellow, Wahlquist makes clear that the surreal and boldly original film, which explores drug abuse, incest, mental illness and even hallucinations, is only partially based on her life. “I don’t see animals at the table,” she jokes. However, she did mention in the post-film Q&A that she has a sister with whom she fought constantly and might even have a half-brother – both eerie similarities to her movie’s character.

The film focuses on the crumbling life of Mary Holmes (Wahlquist), and her equally insane relatives. Addicted to drugs and alcohol, unable to hold a job and haunted by an unbearable secret, she leaves Los Angeles to stay with her mom (Melanie Griffith, in her best role in years) in Oklahoma, the real-life home of Wahlquist and also where much of the movie was shot, thanks to that state’s tax credits. Once there, Mary is also reunited with her mentally disturbed sister (the brilliant Lucy Punch) and her religious harpy of a grandmother (Gena Rowlands, Cassavetes’ mother), while juggling other characters from her past. 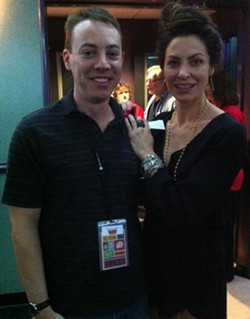 Cameron Meier and Heather Wahlquist at the 2014 Florida Film Festival

One of Mary’s sisters has Tourette’s, but Mary has a sort of mental Tourette’s, unable to separate reality from imagination, and her fantasies are portrayed in off-the-wall deconstructionist ways. A drama on the surface, Yellow launches oddly, and not always successfully, into comedy, music, dance and even animation to depict the crazy world inside Mary’s cranium. Ray Liotta even shows up at the end in a great but brief supporting role. It’s August: Osage County – with a lot more psychedelic drugs!

For director/co-writer Cassavetes (Wahlquist’s husband), the film marks a sort of coming home, considering his cinematic lineage. In fact, if John, the pioneering independent filmmaker, were alive today, he’d probably be making movies like his son’s Yellow, though Wahlquist says her husband didn’t necessarily try to copy his dad.

“I can’t comment on anything that has to do with [the Cassavetes family],” she says, “but I will say [John] and [Nick] were, I think

best friends, so, of course, they shared everything together. I heard great stories.”

John died in 1989, at the age of 59, when Nick was 29 – well before Nick married Wahlquist, his second wife. But the work of his father obviously still affects Nick, and after a string of very un-Yellow like projects, such as The Notebook (in which Wahlquist also had a part), the similarities between father and son seem stronger than ever.

Not only is Yellow a departure from many of the younger Cassavetes’ other films thematically, it’s also a departure logistically and financially, considering that the movie embraces so many genres.

“They stopped trying to figure out how much it would cost,” Wahlquist says. “It became such a huge production when Nick decided Busby Berkeley-style things needed to go in it. Literally, he spent the rest of [the budget], and we just kept shooting the rest of the film.”

So how did the movie, which is still undergoing post-production tweaks in preparation for a possible limited or general release later this year, get finished?

“It was a lot of favors. I think it just got worked out,” Wahlquist says. “We got shut down the first week of filming, and we got shut down for a year

and then came back and finished.”

Clearly, the film was a financial gamble, literally.

“Nick tells a great story,” she says. “He went to Oklahoma,

to Riverwind, which is this big casino outside Norman, Oklahoma, and he went in and won the money he needed

to get the rest of the money for financing.”

Lastly, since the film’s title obviously has little to do with timidity, what does it mean? In her Q&A, she told the Florida Film Festival audience that “yellow” refers to the color of the pill – whether it be Valium, Libutol or another drug – that makes you temporarily happy and keeps your life worth living, as opposed to higher-dose drugs of other colors.

So, just as in the Rolling Stones’ Mother’s Little Helper, there’s a little yellow pill for Mary. Yet it’s actually the audience that benefits most from Yellow, as Cassavetes and Wahlquist’s creation is one of the most memorable film experiences you’ll have all year.

You’ve probably heard that blue is the warmest color. I vote for yellow instead.