Zonko's has closed at the Wizarding World of Harry Potter 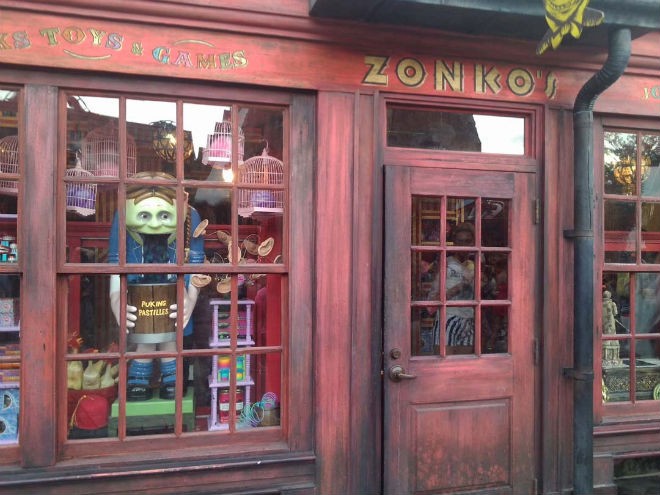 More Diagon Alley-related changes are afoot at The Wizarding World of Harry Potter. It appears that Zonko's, the joke shop, has closed. The storefront's still there, albeit magically diminished in size, acting all tricky and stuff, because once you step inside, it's all Honeydukes all the time. Things inside Honeydukes have been shuffled around, making a huge difference in the claustrophobic feeling you always got when stepping inside the crowded shop. The wizarding wheezes have been replaced with rows and rows of candy jars.

Now, don't get us wrong, we love a good candy store and Honeydukes is one of the best, but there are things we'll miss about Zonko's. The Pygmy Puffs, for example. Especially the super-silly and super-loud naming ceremony. And even though they were just a thing that hung from the ceiling, we'll miss looking up and seeing the Extendable Ears. Universal's making up for the closure of Zonko's by including Weasley's Wizarding Wheezes as part of the Diagon Alley expansion. One can only hope that all the best bits of Zonko's will find their way into the new joke shop.

The disappearance of Zonko's isn't the only recent change to Hogsmeade. Two new storefronts have been added, McHavelock's Wizarding Headgear and Madame Puddifoot's Tea Shop. McHavelock's fills up some of the space left from the Honeydukes/Zonko's remodel, while Madame Puddifoot's replaces Wiseacres Wizarding Equipment, which will be an actual store once Diagon Alley opens. Alas, these two new additions are storefronts only. Sorry, Cho Chang fans, you won't be able to visit the tea shop where Harry and Cho had their (not-so-romantic) Valentine's date.

Here's a before and after video of the changes to Honeydukes (and the now disapparated Zonko's):

And a look at the new storefronts of Hogsmeade: