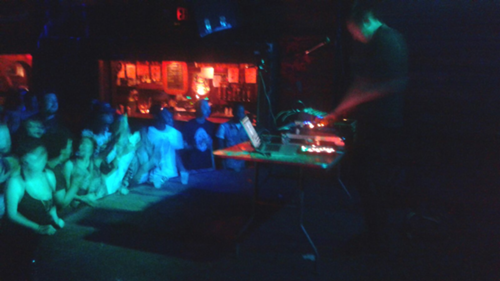 (Image: Giraffage and why a cell phone does not a photographer make)

It’s fitting that any live voyage out onto the more abstract reaches of the electronic music frontier includes some Relief in Abstract cats.Within these city limits, it’s almost obligatory. So, sharing the bill with the touring likes of San Francisco’s Giraffage and New York’s Branchez were two RIA acts: Tampa’s Spies on Bikes and Orlando’s Marble (April 28, Backbooth). Of the two, Spies on Bikes really bumped the pulse, playing first but coming out firing. His style range is laudably varied with pop intelligence and even a nice live vocal aspect. What makes it all go, though, is his sense of beat. Even when on the chill, his rhythm architecture is forward and assertive. Amen for that. Even though the politics of early had the crowd hugging the wall like a third-grade dance at that point, Spies on Bikes had them not just applauding but straight-up whooping. But that wallflower shit sure broke down quick once a couple RIA crewmembers – including superstar Marcel Everett (XXYYXX) – stepped up fanboy-style and vibed out in front of the stage. Well done.

Marble’s more impressionistic soundscaping is an excellent place to underscore how much of a boon visuals are for physically nuanced shows like this (read: knob-twiddling and button-mashing). The importance of that there component ranges from welcome complement to saves-the-day bailout. I’ve seen some experimental electronic shows that would’ve made me flatline were it not for the visual rescue of Broken Machine Films. So, because of his effective live video mixing during Marble’s set, Guillermo Casanova (RIA’s go-to visual guy) deserves due credit.

But one producer-type who can fly without that help is Giraffage, whose active, fleet-fingered live work was impressive. And musically, the guy kicks it pretty hard. By tastefully repurposing some near-classic mainstream songs with big energy and major low-end sickness, his jams are fresh R&B pump-ups for the underground beat scene.