Even though you don't live in one of the Seven Kingdoms of Westeros, sitting on the iconic Iron Throne is a bucket list item for any die-hard Game of Thrones fan. The Iron Throne is coming to Orlando next Friday as part of Brighthouse Networks' Home Security and Control event. While you won't exactly get the chance to "do what queens do," fans of the show will get the chance to sit on the throne and let their imaginations do the ruling. Or, at least, get their picture taken in it before being forced off of it so that the next wannabe-ruler gets their shot at the throne. Just like the show!

Once you've been unceremoniously deposed, maybe keep the celebration going with one of Ommegang's Game of Thrones beers. We might have bought one of each this weekend and enjoyed them while taking in the latest episode. Our favorite was the Take the Black Stout, but Iron Throne seems the most fitting after an afternoon of throne-sitting. 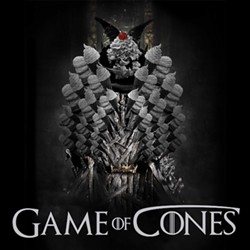 Game of Cones: The days are bright and full of ice cream!

The Gist HBO game of thrones