Taking over the two most musically active blocks on the Mills Avenue strip, Psych Night 2 (May 7, Will’s Pub & Uncle Lou’s) was the result of two small shows that, rather than be same-night competitors, partnered to become a single, bigger joint event. How’s that for esprit de corps? What started out as separate shows, through cross-pollination and synchronization, became a mini fest that no doubt exposed people to some new music.

By billing the night as a celebration of all things “garage,” the organizers – Bread & Circuses and Norse Korea – took a little liberty with the term considering the range of styles on display. But the quality was high with some strong national names, the heaviest hitting of which were, without question, L.A.’s Froth and Lansing’s the People’s Temple.

Featured on notable underground boutique labels like Burger Records and Lolipop Records (alongside Orlando crops like Wet Nurse and Strangers Family Band), Froth was the band that best fit the event’s express parameters. Packing serious sonic mileage for a trio (see: 12-string guitar), their thick garage fog honors the past but looks forward, weaving together psych-rock, fat fuzz and some modern punk edge into one brawny trip. Transporting, heavy-headed and vaguely menacing, Froth is a pretty deadly cocktail that's a big tier above their peers.

The People’s Temple also came with a serious résumé with releases on weighty labels like HoZac and Jack White’s Third Man. Their sonic size comes from sheer manpower in a towering three-guitar approach to garage rock that has a way of going from traditional stomp to surprising tornado with little warning. And like their nod to their seminal rock & roll heritage (a cover of “I Wanna Be Your Dog”), it’s all done with big, hairy Michigan balls.

(The People's Temple at Will's Pub / photo by Christopher Garcia)

On the night’s other, electronic pole was Brooklyn-based but Gainesville-raised Michael Collins. If his past in Prince Rama didn’t signal you that this was going to be far to the left of your usual pop music exhibition, his between-song address and crazy-ass rig – a wood case that unfolds into an array of keys, knobs and buttons – would have. With dance beats and big synth sheets, his eletro-pop rolls out like homemade hipster disco but with something else underneath. What exactly, I’m not sure, but the first song was in Sanskrit.

A curious new homegrown find was area band Gloomwolf. As far as I could spot (and count) from a first listen, their rock touched on indie, psych, math, post-rock, ‘60s, ‘70s and ‘90s, all with an unusual pop sense. Their scattered sound has lots of familiar ether but is smashed together in ways that aren’t entirely predictable. We'll see if they can crystallize it to the next level, but at the very least it's an intriguing bouillabaisse of potential. 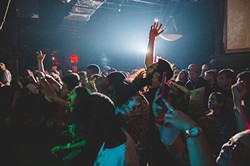