Hipsters are ruining our city with art: photos of Mills 50 before murals

May 09, 2014 at 3:49 PM
comment
This week, we wrote about the recent commotion over murals in Orlando. In some neighborhoods, like Mills 50, some people are complaining about murals being painted on walls of small businesses – particularly a new one that was painted by local artist Dolla Short on the wall at Will's Pub. They say they find it crude and have been complaining to the city about the increase in street art, which has to date not fallen under the city's code-enforcement radar. Until now. The city hasn't officially come out and said anything definitive, but it's thinking about whether it's time to regulate mural painting on private property. Comments on our story were surprisingly divisive and even a little mean-spirited. Some defended the murals, some complained about hipsterization of Mills 50 and others specifically called out Orlando's most well-known mural painter, Andrew Spear, whose murals have become a ubiquitous part of the cityscape.

One commenter, in particular, complained that the people who love the murals are "trendy little pukes that still haven't discovered a razor" and that the Mills 50 area is turning into a "train wreck/collage of gawdiness."

So we went to Google Maps' way-back machine (aka, Google Maps Street View, which lets you compare various street views going back to 2007) to remind ourselves what the neighborhood looked like before the likes of Spear, Will Walker, Dolla Short and others had their way with blank concrete walls. The photos below are images of what various areas and street corners look like today, with mural treatment, and what they looked like in 2007, before Mills 50 was infested with art.

First, here's the mural on the side of Will's Pub, which was painted this spring:

Here, according to Google Maps, is what the side of Will's Pub looked like in 2013, before the mural went up. Plain concrete wall facing plain concrete lot:

And here's what that building looked like in 2007, before Will's even moved in. We could have had a desolate storefront and a blank concrete wall overlooking a parking lot.

Here's a mural painted by Andrew Spear on Mills, at the bus stop in front of Forbidden City Chinese restaurant: 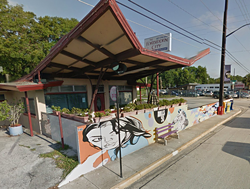 Here's what that stretch looked like in 2007, before it was given the mural treatment:

Next, we have another Andrew Spear mural, this one painted on a building at the corner of North Mills and East Colonial Drive on the side of a building occupied by cell-phone repair business IFixYourI.

Here's what it looked like before the hipster pukes got a hold of it:

Here's another art project that's sweeping the city and contributing to our gaudy collage – plain electrical boxes around town have been painted by local artists to brighten up street corners and beautify neighborhoods. This one's a little harder to see, but we're talking about that colorful box, just to the right of the Publix sign at the corner of Shine and East Colonial.

If you're the type who finds the painted boxes garish, though, you probably preferred looking at this view of the same corner:

Here's a view of the Hideaway on Virginia Drive, which today sports an Andrew Spear mural overlooking the parking lot:

And before there was Andrew Spear, there was nothing but Miami Dolphins colors:

This one isn't a mural, but it's definitely art. When art-supplies store Sam Flax moved its business from its old location to a new spot at 1800 E. Colonial Drive, it hired Metro Finishes, a company run by Spear and fellow local artist Charles Marklin, to transform the building into a Mondrian-inspired storefront: