Location Matters: Reign of the Orlando Superchildren (part 2 of 4) 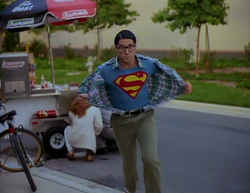 Location Matters is a series that reflects upon pieces of Orlando immortalized in popular film. Today, the second installment of a sub-series devoted to the 1980s Superboy program that was produced in our fair metropolis (view part one here).

After the first season, Superboy moved production from Disney's MGM Studios to Universal Orlando, an operation that offered the show a solid three year contract and, perhaps more importantly, better technological facilities. This translates to the screen; moments of "backyard production" are kept to a bare minimum this round, and you actually start to believe that maybe Superman did go to college in Florida. There's more of a comic book feel to Superboy in the second season as well, which is partially thanks the writing (the episode titles say it all: "With This Ring, I Thee Kill"; "Johnny Casanova and the Case of the Secret Serum") and partially thanks to the brand new Superboy himself, Gerard Christopher.

Gerard has no issue leaning on Christopher Reeve's famed interpretation of this dual role (something previous Superkid John Newton has said he was trying to avoid) and gives us the Clark Kent as broad nebbish for which Super stans tend to clamor. On the other side of the coin, Ger's Superboy is more comfortable quipping with criminals and giving that patented Super-wink n' smile. This is a better fit for the world Superboy paints, especially since Lex Luthor is now a full-on "bad guy" (complete with spunky moll) and Clark's new roomie is a stereotypical '80s "party guy." Yes, poor  T.J. has been written out, having left college for work with The Daily Planet (you don't need a degree when your dad is editor in chief). T.J.'s offenses as a character were minimal --- looking too much like Kirk Cameron, picking his nose when Superboy wasn't around --- but it doesn't matter. Now we have Ilan Mitchell-Smith as Andy McAlister, dudemeister supreme.

Mitchell-Smith is best remembered for his turn as shy super nerd Wyatt Donnelly in heralded '80s teen comedy Weird Science. As Andy McAlister he puts the onscreen persona of Weird Science co-star Anthony Michael Hall into a blender with Spicoli, Duckie, and Chainsaw and spits out a character you wish the Kryptonian high court would jail in a Critters sequel. Clark should receive the medal of honor for having to live with this uninspired beer/sex/moolah-seeking missile. Anyone else would have thrown Andy out in the street for running that 8 track machine rental scam out of their dorm. I will give Andy one thing: at least he's not a puppet or a sassy robotic child.

Actually, I'll give Andy another thing: he wears a couple of funny t-shirts. One is a David Bowie Glass Spider tour shirt, which features the most 1980s rendering of the Thin White Duke I've ever seen. The other is one of those weird dinosaurs dictionary shirts from that time period. You know, a comical rendering of a dinosaur doing something pedestrian with a cute definition at the bottom. Andy's is "Tennisaurus." Paired with neon shorts and hat, Andy set that shit off.

Superboy dips a bit deeper into Kal-El's established pool of villainy in this season. There are spins on Metallo, who more or less mirrors the modern age version found in comics; Super clone Bizarro, now the accidental creation of Shuster University's resident scientist; clumsy sorceress Yellow Peri, here a Superboy obsessed waitress; and a mutation of Toyman called Nick Knack, portrayed so well by Gilbert Gottfried he deserves to be uttered in the same breath as Gorshin's Riddler or Romero's Joker. Mr. Mxyzptlk also returns for a woozy spin where he forces Lana and Superboy into a Leave It To Beaver scenario so as to ward off Richard Kiel's revenge-seeking giant.

Superboy's main baddie remains Lex Luthor, though, a role now inhabited by deliciously smarmy Sherman Howard (Lethal Weapon 2, K-9). Plastic surgery is a convenient way to explain why Lex is so much larger, older, and doughy than first season Lex Scott Wells, and Howard spends a chunk of episode one wrapped in bandages a la Darkman. The guaze doesn't prevent him from chewing scenery like a pro, which isn't a detractor. Lex Luthor is supposed to be grandiose and over the top. This is a guy who eventually tries to nuke California off the map to try and free up beach front property. He doesn't do "small."

The biggest guest star this round might be former James Bond/Jesus Christ George Lazenby, who shows up as Superboy's biological father Jor-El in "Escape to Earth" (alongside former Bond girl Britt Ekland as his wife Lara). They make George up to look like Marlon Brando from the first Superman film but it's pure Lazenby when the mouth opens. Suave yet stiff, warm yet arrogant, Lazenby's Jor-El makes you wonder about the possibility of Brando's original talking bagel idea for Superman's dad. Superboy, in all his infinite wisdom, thinks it would be a good idea for his Kryptonian parents to meet his adoptive parents; this goes about as well as anytime Beyoncé is forced to be in the same room as Kim Kardashian.

The episodes featuring non-canon Super characters are less thrilling. "The Haunting of Andy McAlister" is centered around the old trope of the possessed house (perfect if you're looking for a Poltergeist rip-off featuring the Last Son of Krypton). At least two outings feature young, sexy Dracula --- excuse me, Dr. Dracula. Yes, the king of the undead is a practicing MD. The season finale, "The Woman Called Tiger Eye," finds another area sorceress using her magic to turn Lana Lang into a snake, which at the very least saves LL from the usual stress of being cat-called, hit on, or literally hit by every person in Shusterville. Even Superboy yearns for his vibrant female friend, but he relegates his frustration to private moments where he can scream at televisions showing her kidnappers and destroy whatever detritus is nearby.

Lana handles being the only recurring woman in Superboy like a champ, rarely shrinking from confrontation despite the fact she probably knows it could end with her transformed into a reptile or possessed by an alien gas cloud or menaced by bickering vampires. It's no accident that Lana appears more assured in season two: actress Stacy Haiduk admits her season one performance was hampered by the fact she was dating John Newton, and it was only after Newton took off the tights that she felt at ease with all around her.

In creating a tighter and more inclusive world for Superboy, show producers unfortunately locked out backdrops and locations that loudly scream Orlando. Even UCF, the stand in for Shuster University, gets little screen time during this stretch of adventures. That said, the City Beautiful manages to weasel its way in here and there. Witness: Bizarro kidnapping Lana to Mystery Fun House, where Superboy forces the clone to confront his confusion and fear by the stretchy mirrors; Clark Kent dashing into the phone booth outside the parking garage on W South and Boone downtown (you know that phone booth; it's always been there and obviously will never disappear); Andy McAlister bravely jumping from his second or third story UCF dorm window, outfitted like one of the New Kids On The Block (puffy red jacket, tight black jeans, British Knight-esque hightops).

Speaking of the early '90s, at least one episode features a character operating a Nintendo Gameboy sans cartridge. Boy, I hope someone got fired for that blunder.

As with Superboy's first season, there are also plenty of scenes that take place in front of palm trees and patches of sandy grass in the goddamn middle of nowhere. If you can find the service road where Nick Knack reunites with his love interest Daisy and her groovy Volkswagon van, more power to you. If you're lucky maybe you'll find Nick's beanie or cartridgeless Gameboy lying amongst the weeds.

Though we may mourn the fact season two Superboy never threw an evil doer directly into Lake Eola or rode the airport monorail to see Andy off on an extended trip behind the Iron Curtain, tinkering with the show helped bring in a larger audience. America was warming up to the idea of burning off Saturday evenings watching Gerard Christopher tangle with classic Superman villains both known and obscure. Sadly, anyone hoping the program would stay the course and offer up nothing but pulpy confrontations ripped from the funny pages were in for a rude shock come season three. Several years before Mulder and Scully were chasing UFOs on The X-Files, Clark Kent was investigating them as an intern for the Bureau of Extra-Normal Matters. Who better to hunt aliens than an alien himself? Of course, there are some werewolves too, and psychic fires, and a soul-stealing dark carnival not affiliated with the Juggalos.

Pretty nutso, but our syndicated alternatives at the time were The Munsters Today and The New Lassie. When faced with Gimme a Break! star Howard Morton as Grandpa Munster, a-UFOing with Superboy we went.

Can Clark Kent keep his intergalactic heritage a secret as he slaves away for a made up branch of the federal government? Will Bizarro's marriage work out, or is this female clone only interested in his money? Will Superboy finally don the motorcycle jacket and John Lennon shades most people my age associate with his character? Stay tuned for all these answers and more in part three of REIGN OF THE ORLANDO SUPERCHILDREN!