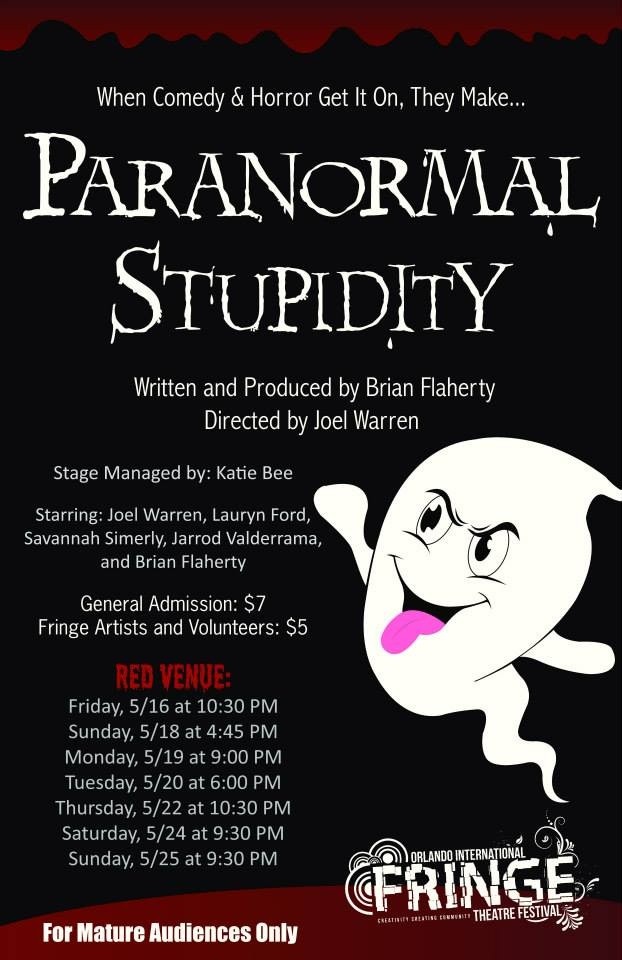 Brian Flaherty, writer and star of Paranormal Stupidity, describes his new play in its program as "a crude and mildly frightening comedy," and for once there is 100% truth in advertising at the Fringe. There's little about this 50-minute show -- from the characterizations and plotting, to the language and delivery of lines -- that could qualify as in any way sophisticated or polished, yet it still managed to pull a few solid laughs from me, thanks mainly to the outrageous comic sensibilities of director/co-star Joel Warren.

Paranormal Stupidity's scenario has potential, and there are a handful of clever gags (like the green lighting when the characters don night-vision goggles), but the script is stymied by verbose exposition, an awkwardly inserted pregnancy drama, and characters who enter and exit scenes arbitrarily. Dialogue delivery is so loose as to seem semi-improvised (unfortunately not in an intentional way), and while the cast seems to be having fun sucking down Yuenglings between searching for their next cue, I started to wish they'd toss me a beer or two. Just as the action is approaching a climax, it ends with a literal "f**k that" to the audience. The real reason to see this show is Warren, who makes Brad's every loopy loutish line ("The sexual tension is as thick as Gilbert Grape's mom") sound like it just bubbled from the dark recessess of his reptilian brain.