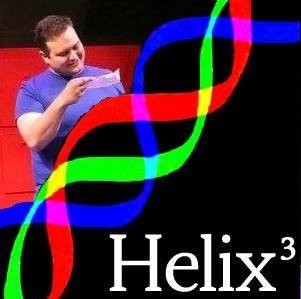 HELIX³ is an experiment in long-form improvisation from Winter Park-based troupe Spur of the Moment, in which three audience members' personal stories are spun into a single entwined narrative, with impressively entertaining results. At the preview performance I attended, the three leads were Travis Ray as "Pat," a theatre patron in an argument with her friend over the meaning of a play; Shannon Lynch as "Gale," a quilt-crazy mom with a champion crew coach child; and Ryan Bathurst as "Aubrey," whose new roommate's rabbit wrecked their apartment.

Over the course of fifty-odd minutes, the trio took these real-life tales and wove them into a tapestry of absurdity, with Dustin Schwab and Megan Borkis jumping into a slew of supporting roles. A visit to the veterinarian, karaoke at the Hammered Lamb, and a faux-French actor with a fake limp all were somehow incorporated into the action, which managed to interweave all three plotlines and still end in an tidy epilogue that neatly tied off off any loose ends.

Most importantly, co-creator Nick Zazulia did a masterful job as emcee, dinging his bell to pause scenes at the perfect moments, and gently proding the audience to supply suggestions that kept the pace popping. Untypable title aside, HELIX³ is hands down the most enjoyable improv I've experienced at the 2014 Orlando Fringe so far.