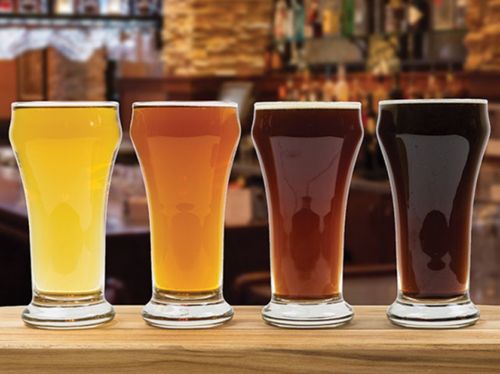 Where can I get craft beer in Orlando?

The Brewers Association has deemed May 12-18 American Craft Beer Week. In light of all the hubbub surrounding Senate Bill 1714 and its apparent death on the House floor, now seems like the best possible to time to celebrate the craft beer movement. Here's where you can do just that in Orlando:

American Craft Beer Week Festivities
Orlando Brewing's got a different event going on every day this week. Highlights include Tuesday's beer and cheese pairing with La Femme Du Fromage and Wednesday's Liquid Education beer school. Toss back a limited-release beer each night.
When: Monday, May 12, through Sunday, May 18
Where: Orlando Brewing, 1301 Atlanta Ave.

Colorado Cool-Aid
Take part in blind-tasting of Colorado-made pilsners, including Left Hand Brewing Company, Oskar Blues Brewery and Great Divide Brewing Co. Reps from the breweries will be on hand with free swag.
When: 5 p.m. Monday, May 12
Where: Redlight Redlight, 2810 Corrine Drive

20 Years of Shipyard and Sea Dog Brewing
Sea Dog's Floridian brewmaster, Bobby Baker, will be on hand to discuss the Maine-based brewery's beers. If you can hang out until 8 p.m., you can participate in a trivia contest.
When: 5:30 p.m. Wednesday, May 14
Where: World of Beer - Dr. Phillips, 7800 Dr. Phillips Blvd.

Craft Beer and Burger Grill-Off
Got a hankering to judge some burgers? At this event, you'll plop down $6 and get three sliders in return. Vote for your favorite to crown a new champion slider-griller. Also included in the $6? Left Hand Brewery beer samples and the chance to win a Whole Foods gift card.
When: 5:30 p.m. Thursday, May 16
Where: Whole Foods, 1989 Aloma Ave.

Terrapin Takeover at Spacebar
It'll be all Terrapin Beer Co. all the time at Spacebar on Saturday. We've got our fingers crossed for the appearance of Mosaic Red Rye IPA on one of those handles.
When: 8 p.m. Saturday, May 17
Where: Spacebar, 2428 E. Robinson St.

And if none of these trip your trigger, you can always hit up one of the many craft beer bars Orlando has to offer.