Today, the Orlando City soccer club unveiled its new, streamlined club crest. The three-headed lion and any trace of red are gone from the new logo, which was designed by season ticket-holder David Brotherton. In its place will be a golden lion (with only one head!) on a royal purple background. The lion's mane is made up of 21 sun flares, a subtle reference to both the Sunshine State and the fact the the City will be joining the MLS as its 21st club. The single lion embodies strength and pride of the team ... and the city it represents. Not only does the lion look super-fierce and ready to win some games, but, if you look at it just right, you'll see the crown it's wearing as a nod to last year's USL PRO championship.

As part of the new logo reveal, Orlando City Soccer has hired seven local artists to paint murals around Orlando that feature the crest in a variety of different scenes. Sadly, the murals will be temporary, only remaining up until June 9th.

For you die-hard City fans, there's already merch available in the online store, including a selection of pretty sweet scarves that are sure to, um, come in handy in Florida? Well, as a fashion statement if nothing else. 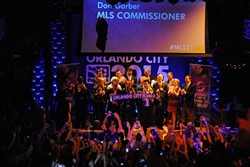