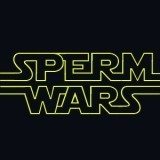 Sperm Wars at the 2014 Orlando Fringe.

File this one under "only at the Fringe": Sperm Wars stars Jeff Leard -- clad in a white body stocking, goth gauntlets, and not much else -- acting out all the roles in an epic space opera occurring a long time ago in a reproductive system far, far away. The gallant Captain Gamete, veteran of three erectile dysfunctions, commands his seminal squadron in a suicidal assault against the gigantic orb of terror known as an "ovulated egg."

The resulting romp reads like a randy spoof of Epcot Center's extinct "Cranium Command" show, with an anthropomorphized prostate instead of George Wendt. Sci-fi fan service and penis puns might seem like a thin premise on which to erect a plot, but Leard does an admirable job of keeping the jokes coming through the short 45-minute running time, right up until his unsatisfyingly abrupt gag of an ending.