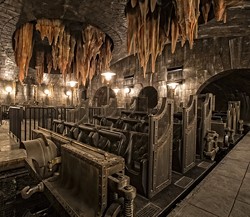 We're still a few weeks away from seeing the interior of Diagon Alley in the flesh, but early this morning Universal Orlando unleashed a blast of hot new details on the Wizarding World of Harry Potter's new signature Gringotts ride. Much of this info has been previously reported as rumors, but it's nice to have official confirmation and some fresh concept art.

Harry Potter and the Escape From Gringotts will be a first-of-its-kind "multi-dimensional" thrill ride incorporating roller coaster -type ride vehicles, 4K 3-D projections, and live special effects to recreate the bank break-in scene from Deathly Hallows Part 2. Guests will be touring the famous goblin vaults at the same time that Harry and friends are stealing the Hufflepuff horocrux, leading them to encounter Bellatrix Lestrange, Voldemort, and a certain fire-breathing dragon.

Each ride vehicle is elaborately detailed after the steampunk-style goblin cars seen in the film, and will hold 12 passengers. The ride will last approximately 4 minutes, and will enforce a 42" minimum height requirement. No opening date has been announced yet, but the Wizarding World expansion at Universal Studios Florida is expected to debut before the end of June.