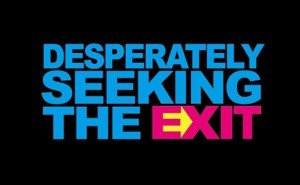 I've suffered my share of humiliations during my days in the theater, but nothing like the international evisceration experienced by Peter Michael Marino, the self-proclaimed actor/writer/director/homosexual behind the manic monologue Desperately Seeking The Exit. The show's title is derived from a particularly devastating review of his ill-fated attempt to turn Desperately Seeking Susan into a multimillion-pound London West End musical.

The concept of combining the 1985 Madonna movie with Blondie's greatest hits (which occurred to him after quite a few bong hits) was just so crazy it could have worked. But, as Marino so entertainingly explains, a perfect storm of clueless producers, an uncommunicative director, and a robot-dancing choreographer conspired to kill his first-born child before it got a chance to crawl. Joe Mantello, Debbie Harry, and Rosanna Arquette are a few of the famous names Marino gleefully drops during his epic rant, but this is more than a dirt-dishing whinging session; Marino shares incisive insights on the challenges of adapting screen to stage, cultural differences between England and America, and his own battles with crippling depression.

Marino's delivery is so aggressively offhand that it feels more like a rowdy chat over pints of cider than a scripted show he's been touring for years, which only adds to his amped-up charm. You don't need to have ever produced or performed so much as a skit to empathize with the ecstatic agony Marino endured for our enjoyment. Forget the self-effacing title; this show had me riveted to my seat for the full hour.