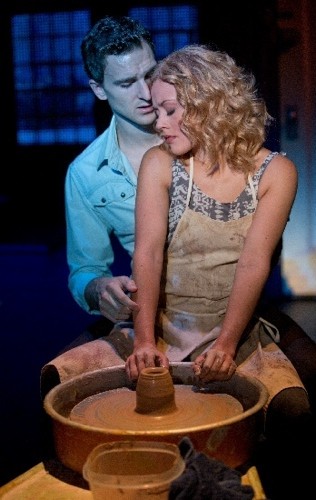 With the new Dr. Phillips Performing Arts Center scheduled to open this fall, the Fairwinds Broadway Across America series is taking its final bow this week at the Bob Carr, and while the venue will likely go unlamented by most, it deserves a better eulogy than Ghost The Musical. Writer Bruce Joel Rubin's adaptation of his own Oscar-winning 1990 screenplay recounts the plot of the supernatural romantic thriller with a truckload of flashy effects, but little of the original's soul seems to have made it onto the stage.

As storefront psychic Oda Mae Brown, Carla R. Stewart) brings much-needed color to the palid proceedings, much as Whoopie Goldberg did in her award-winning screen turn; her pair of Jesus-jumping backup singers (Evette Marie White & Lydia Warr) are among the most entertaining performers in the production. Speaking of color, Hugh Vanstone and Joel Shier's fog-assisted lighting is striking, and Daryl Stone's costumes cleverly clad spirits in faded fabrics.

The vaunted illusions created by Paul Kieve are the only real reason to see this show, with one absolutely stellar Pepper's Ghost gag, and some nifty levitating effects. Unfortunately, director Matthew Warchus clunky staging and ill-conceived reimaginings fall to take full advantage of the technical elements; Brandon Curry's vengeful subway ghost (memorably created by uber-creepy Vincent Schiavelli) has been turned into a rapping refugee from The Matrix, and the transformation of the movie's terrifying shadow demons into projected red sparkles neuters their impact.

Most fatally, Dave Stewart & Glen Ballard's synthesizer-heavy score in entirely unmemorable, stocked with generic pop songs that do nothing to move the plot along, and take way too long not doing it. "Unchained Melody" is the only melody likely to stick in your head, but we have to suffer rockabilly and minor-key metal versions of it before finally hearing the classic Righteous Brothers arrangement. The lackluster music isn't aided by Ashley Wallen's choreography, which resembles moody modern dance moves mangled into submission by a mugging show choir.

As theatrical junk food, Ghost The Musical goes down a bit easier than some other film-to-stage train-wrecks like Chitty Chitty Bang Bang, but it's unlikely to hold much appeal to anyone who doesn't already love the movie enough to enjoy a flaccid facsimile. Hopefully the next Broadway season will bring better things to Orlando, because the Dead Bob's swan song is DOA.